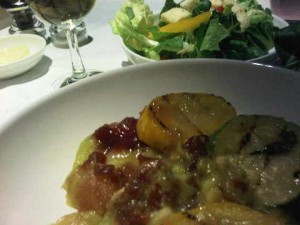 Simply Sunday. Obviously no-one would choose an airline simply for the food but, all else being equal, give your money to the carrier that feeds you well.

(You do not expect any food at all on budget airlines but you might think Aer Lingus would come up with at least half a pint of Guinness – all I got last time I flew them, at lunch time, was 14-grams of mixed nuts.  Never again.)

Anyway, Qantas’ food ombudsman is Neal Perry of Rockpool, one of Sydney’s best restaurants, so he has his professional reputation at stake.

The best dish I ever had on an American airline was a Subway sandwich in the days when Continental had a partnership with them – for a time, United worked with McDonald’s, but only on kids’ menus, and I managed to fly as a juvenile and try a McDonald’s box, which was much more exciting than what the ‘adults’ either side of me had.

A general tip is if you fly an airline from, rather than to, its home base you will get better food. Wherever, the perfect airline food should look good, and taste good.

This gnocchi dish, with salad, on British Airways from London Heathrow to Hong Kong fits every criterion – well, Heston Blumenthal is the guru, here.