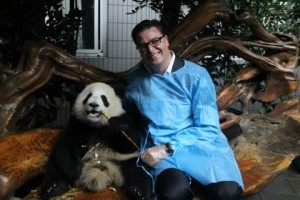 You never know what today is going to bring, says the gal. This morning it was supposed to be raining in England, and then the sun shone. Another inveterate traveller, Paul James, was in Chengdu looking at some of the hotels he oversees for Starwood Hotels and Resorts, and he was diverted to Chengdu Panda Base, a non-profit research and breeding facility for giant pandas. When the facility opened in 1987, it had six pandas rescued from the awful modern and commercial world – now it has 83.

All the best travellers, those who get the most out of every day, make the most of every opportunity.  I learnt Thai boxing in Phuket – which my friend Michaela Guzy did in Bangkok. I went kayaking in mangroves in Abu Dhabi and, as GirlAhead fans know, the animals in Galapagos were beyond comparison (though I still have to cuddle a panda). Happy simply-Sunday.