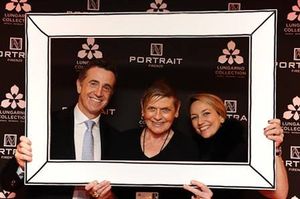 Valeriano Antonioli, CEO of the Ferragamo family’s Lungarno Collection of luxury hotels, held a smashing party in Cannes during ILTM earlier this month.  Of course he had the venue of the Salvatore Ferragamo shop on the Croisette as venue, which not surprisingly attracted all the A-list people at ILTM. This year Valeriano Antonioli was especially promoting Portrait Suites Firenze, which opens next to Florence‘s Ponte Vecchio in the spring. What better way than to greet people with a portrait frame?

Simply Sunday, says the gal.  Keep it simple and the message gets through.