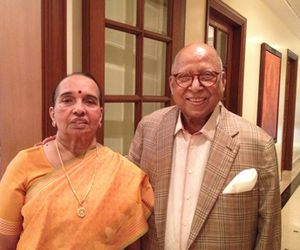 Madame Leela, and the Hon Chairman

I took this photo of the Nairs, Padma Bhushan Capt. C.P. Krishnan Nair and his wife, Madam Leela, January 22nd, 2014.  Before my return flight, I was spending a few hours at the hotel they built in the garden of their bungalow, The Leela Mumbai. The Hon. Chairman, as he was affectionately known, invited me to tea, an invitation that obviously could not be refused.  Aged 92, he walked over to the hotel, a ten-minute stroll through fantastic lush gardens, to escort me to his home (the ‘bungalow’ of course turned out to be a mammoth, two-floor complex that also houses the two Nair sons, Vivek and Dinesh, and their families).

Dear Madam Leela, after whom he called his hotel company, probably had no idea who I was but quickly we discovered a mutual love, of fabrics.  One after another of her exquisite saris was brought out for inspection. Capt. Nair beamed, as he always did, and as he undoubtedly is still so doing, up in heaven. He died, Saturday May 17th, 2014, and within minutes, it seemed, messages of love and appreciation were rushing round social media.  He was my honorary father, said one top hotelier in Seoul. To me, he was a special friend, who delighted in listening, sharing, giving advice, and adding a sense of fun in life.  A couple of years ago he turned up for breakfast in Mumbai in a dayglo yellow polo shirt, and the following month, at ILTM Cannes, he wore a bobble-topped ‘tea cosy’ hat to keep off the December cold.  Capt. Nair, you were, and you are, a legend, and all those who stay in your luxury hotels, as well as those who are lucky enough to be part of The Leela, will forever not only remember you but carry on your philosophy.