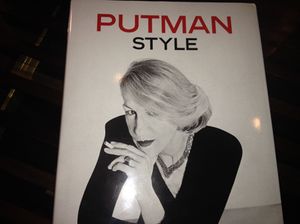 This tome on designer Andrée Putman made the gal realise there is always time to start something new (the book is one of hundreds, all must-reads, in the sensational library of JK Roma, in Rome – but that is another story, to come in a few days’ time).

Born in 1925 to a highly-privileged and high-profile Parisian family, she was 53 (FIFTY-THREE) before she started designing – earlier careers of concert pianist and magazine writing and the like had fallen by the wayside, as had her husband, art critic, collector and publisher Jacques Putman.  Once she had established her Ecart (trace, backwards) design studio, she never stopped, with hotels of the calibre of Morgans in New York and Pershing Hall, Paris, and stores for Azzedine Alaia, Balenciaga and Lagerfeld.  She was still designing until her death, aged 87.

So, Girlahead says, it is never too late to start something new!