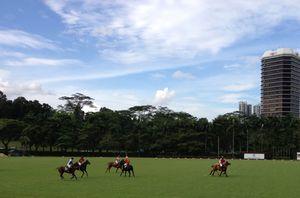 Simply Sunday.  Women have a much more difficult time than men in making use of professional networking – or so an article in the Financial Times said this week. Best networking at the top?  Polo, says the gal’s friend James McBride, who relishes his handicap (he keeps his pony at Singapore Polo Club – he is playing, in the photo). St Regis, as a hotel group, agrees: their hotels, from London to Bal Harbour, sponsor polo matches worldwide.  In Abu Dhabi, Emirates Palace, which is Kempinski, holds its second polo tournament November 22-23, 2013.  Main sponsor here is Coutts. Yes, go for the top, says the gal.