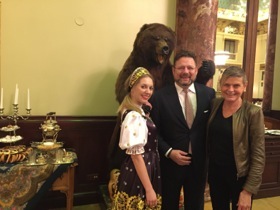 Walter Neumann with two ladies and one bear

In Moscow the gal went for breakfast at the classic-luxury Hotel Metropol, built 1903 by Odessa-born English architect William Walcot, 1874-1943, for financier Savva Mamontov, 1841-1918.  Mamontov was one of the two main supporters of the Russian Impressionists – he founded an artists’ colony at his Abramtsevo estate, and regulars include Ilya Repin and sculptors Mark Antokolsky and Viktor Hartmann. He also patronized the Russian Private Opera, which discovered Chaliapin, and worked with Borodin, Rimsky-Korsakov and Tchaikovsky. (Bit more Sunday eruditon, Mamontov typified what is meant as a maecenas, a genuine patron, named for Gaius Cilnius Maecenas, political advisor to Octavian, later to become Caesar Augustus…)

Today his Metropol is once again loved.  It is privately owned and tons of rubles are being spent on taking it back to its former glory.  Its central winter garden, covered with a stained-glass ceiling, is memorable, and not only for its central working fountain but for a harpist who plays at breakfast.  And, a Girlahead tip, do not miss that breakfast.  See, here, some of the Russian items, and, posing with the (permanent, and stuffed, taxidermist-style) Russian bear are Walter Neumann, who, with its GM Dominique Godat, oversees the luxury hotel on behalf of its owner, and a server in traditional gear.

Moral of today’s story is remember locale and you have even more meaningful mementoes of travel.