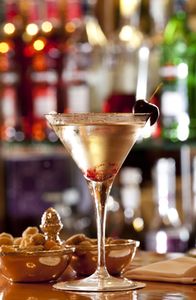 DaliTini at The Ritz Madrid

Simply Sunday.  A gin and tonic tastes even better when it is served in Freddy’s Bar at Hotel De l’Europe, Amsterdam.  Why?  Because Freddy’s is named for the late Alfred Heineken, 1923-2002, scion of that worldwide brewery.  Heineken owns this luxury hotel, part of Leading, so it is more then appropriate to name the bar after him.  In the Netherlands, gin is IT. Freddy’s suggests a Hendrick’s, which they serve automatically with Fever Treet tonic and the required cucumber is her thinnest coils of peel, so pretty.

In Singapore the locale-lover has to have a Singapore Sling at Raffles.  In any St Regis, you must try the local variant on the Bloody Mary popularised in St Regis New York, ever since King Cole barman Fernand Petriot fixed the tomato and vodka concoction in 1934 (in Osaka, the local BM is a Shogun Mary, with wasabi).

The Ritz Madrid, one of Orient-Express‘ gems,  has come up with a DaliTini, a reminder of the fact that Salvador Dali first took to cocktails here, when he came to study at Madrid Fine Arts school in 1920, at the age of 16.  A DaliTini is gin, dry martini and a few drops of cherry reduction. Cheers to locale, whichever luxury hotel it happens to be.