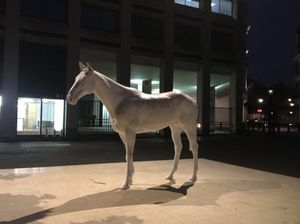 Horse next to Admiralty Arch

Simply Sunday.  As her followers know, the gal has to exercise not only once but TWICE a day, to combat the many hours’ in long plane journeys, interspersed with other hours creating (she does not work, she creates).

The other day I was running from Buckingham Palace along to Admiralty Arch, the unique seven-floor structure that was built 1912 by architect Sir Aston Webb at the command of King Edward VII, who commissioned it as a memorial to his late mother, Queen Victoria (she died January 22nd, 1901, at Osborne House on the Isle of Wight). Admiralty Arch is now going to be converted into what has to be a sensational hotel by Rafael Serrano, who did Bulgari Hotel London.   Anyway, at the arch, facing ‘out’ of it through to Trafalgar Square, on your left is a proud stone horse, quite similar to the Mooi bronze horses in the British Airways lounge at Heathrow.  As a result of this run, I now have to find out more about the Admiralty Arch horse.. as I have said before, exercise opens the mind.