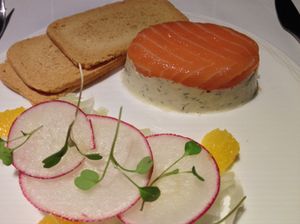 A smoked salmon mousse on that British Airways flight

Simply Sunday.  The gal has said again and again – keep fit on the road, and in the air.  I have just been talking with my good friend Jennifer Fox, President of the international side of Fairmont Raffles.  She travels as much as I and she too needs gyms on arrival.

Let me share a reason why it is so important to keep fit.  The other day I was transitting in Hong Kong enroute, from London, through to Manila.  My incoming plane was 90 minutes late and I had had 95 minutes’ transit time.  I was on different tickets so Cathay, running the Hong Kong-Manila flight, did not know I was coming in on British Airways.  The absolutely brilliant British Airways Customer Service Director, Pauline Clark, asked the captain to radio ahead. The moment the plane door was opened, at the Hong Kong terminal, a head popped in, called my name, out I dashed.  A minder was there to run with me – literally – along the terminal, through transit check in and security, more running to the train to the next terminal, run up escalator (quicker than that lift, said minder) and run to very end of this particular terminal.  I swear it was only 15 minutes later that I collapsed into my Cathay seat.  Yes, they had held the plane back for me, thanks to Pauline Clark’s efficient customer service (thank you Pauline). It would not have worked, however, if I had not been fit, and of course I only had my Porsch Rimowa wheelie, no checked bags. And I got to my next luxury hotel in time for my dinner.