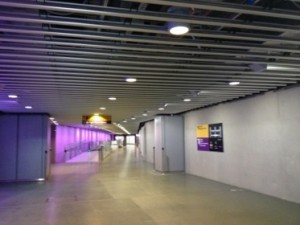 The gal always loved Atlanta Hartsfield as there they allow you to forsake the between-terminals train in favour of a hearty walk, with assorted museum exhibits along the way.

When Heathrow T5 opened you could originally see elevator buttons down to level -4 (the inter-satellite train goes from -2).  Then those buttons were covered up.  Now they have been uncovered.  Great news, fit citizens of the world unite.  You can now WALK between the terminal’s main, A block, and its B and C satellites.  Enter the walkway at A, or B or C.  Last time I flew into satellite C, I made my way straight down to the walkway.  There are people-movers but if you want the best workout, walk the whole way.  It takes about 12 minutes walking fast and it is great exercise, and also save you being cooped up in a train with goodness knows what germs…  well done British Airways for instigating this and, I never thought I would say this, well done Heathrow!