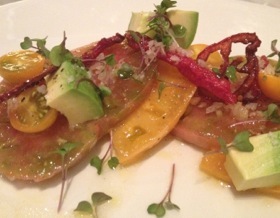 There are some who are over-zealous – I guess the woman who will never make a Vogue cover but who insists on using only organic-pure on her face gets satisfaction from her lifelong insistence. I have heard of a man who insists on cooking in his own pots and pans rather than having contamination from his wife’s family pots.  OK, that is going too far.

Simply Sunday believes in moderation but when you can be organic, go for it. And if it is, as in the case of chef Rafael Casas’ tomato salad at Hyatt Regency Mexico City, heirloom too, it ticks a couple of boxes.  He later insists, by the way, on trying his organic carrots, and, guess what, they range in colour from deep purple to buttercup yellow…

Frankly, I have an issue with many luxury hotels’ ‘organic’ toiletries.  Have other intrepid world travellers noted how difficult it can be to get the contents out of their miniature bottles?  I would rather have a proper amount of non-organic conditioner than an ant-sized blob of organic.