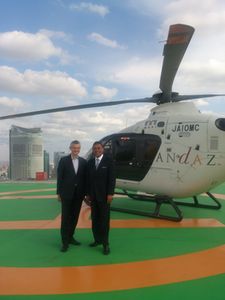 Simply Sunday.  Aim for the top is what every young gal (and guy) is told by parents at a very early age.  Nothing is beyond you, and so on.

Take Angela Ahrendts, who next year moves from running Burberry, where she has been phenomenally successful, to running Apple‘s 480 stores worldwide.  Well, she had reached her glass ceiling in luxury fashion, and perhaps she wanted, for her family’s sake if not her own, to return to the Great USA.

Talking of tops, one of the most sensational ideas people in the luxury hotel world is Arnaud de Saint-Exupéry, great-nephew of the creator of The Little Prince. Arnaud de Saint-Exupéry opened the first-ever Andaz hotel, a conversion of the Great Eastern Hotel in London. Now he is going to open, in June 2014, Andaz Tokyo.  This will be on the top six floors of a 52-floor Mori building in Toranomon. To show off what will be his 164-room hotel – designed by Tony Chi, who did Park Hyatt Shanghai – Arnaud de Saint-Exupéry borrowed a Mori helicopter to take a few top media up there, to its rooftop.  Aim high, in luxury travel. This must be one of the ten best arrival experiences, ever