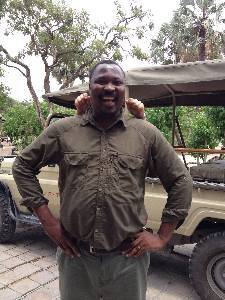 Onx, with Debbie behind him, is there to say goodbye

Savvy travellers plan ahead.  As in many parts of the world, head for Beautiful Botswana and you need malaria tablets, but make sure you take the right ones. At Khwai River Lodge, one of Orient-Express’ sensational luxury safari lodges, Debbie Tucker told me she sees far too many visitors taking tablets that make them ill.

What a waste to have to spend at least a day of your valuable holiday in bed.  Ask your doctor what is best for you. (By the way, if anything does go wrong, Orient-Express has a nurse in Maun, who can fly to visit any of its three resorts within a couple of hours of being called.)

But all good things have to come to an end, and the gal finally left Okavango Delta.  Debbie, standing behind Onx in the photo, was there to say goodbye. 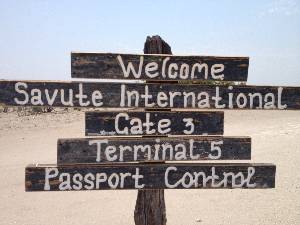 I was driven to the landing strip.  These people have a sense of humour (one of the other landing strips has a great ‘international’ sign).  The strips are, well, bumpy and invariably have several loads of elephant output on them.

Presumably elephants take their exercise up and down the landing strips during the night.  Orient-Express works exclusively with Mack Air and you have to be waiting by the side of the strip for the plane to arrive. 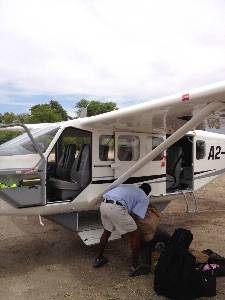 The Mack Air pilot pushes bags into the under-belly container

When it does, the pilot pops out, introduces himself, shakes hands all round and puts your baggage in, wherever.  You are supposedly restricted to 15 kg total, packed in soft duffel-type bags with no wheels.

Certainly hard-case bags will not fit in. André or Tom or whichever other pilot is flying you does a skilful job in shoving bags into the belly-bag underneath the GA8 or whatever plane is flying today.  If only the pilot could also shove in passengers weighing considerably more than 15 kg.

On my last intra-camp flight we picked up one lady who looked like an elephant.  She was, in fact, wearing elephant-coloured trousers, size 90 (exaggerating, but only slightly).  The elephantine effect was ruined by her apple green T-shirt, not grass coloured since the Delta grass is currently straw-coloured.  It was, anyway, quite unsuitable safari-gear colour.  Yes, you find all sorts on safari, but 99 percent of them know to wear camouflage clothes. 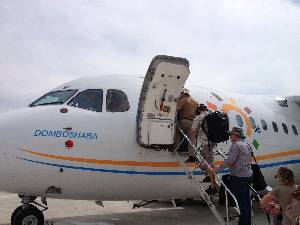 Maun’s airport is truly international, with scheduled flights to Cape Town and Johannesburg, sadly all leaving within 20 minutes of each other.  This means the line at check-in is horrendous.  The subsequent line at the one-belt security is horrendous.

The line at the one-agent immigration is horrendous. Finally, you get to the one departure lounge.  It is horr… with a Capital H. There are only half the number of seats needed.  The air conditioning does not work.  There are no electric sockets.

There are washrooms, but no mineral water vendor, and since the single security guy is ultra efficient your bottle, even with an inch left, has been taken off you.  In the lounge you cannot see the runways so you have no idea if your plane has arrived. 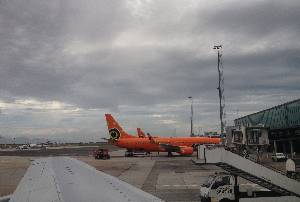 The colourful Mango plane stands out at a grey airport

But once aboard Air Botswana’s RJ80, bound for Johannesburg, you should be able to relax.  The seats are leather and there is just enough room to work your laptop.  Service varies.  Flying from Johannesburg to Maun, they served a chicken wrap in a card box.

Flying back from Maun to Johannesburg, we were offered packs of crackers and dried-beef biltong, and drinks included South African wine, which many accepted with gusto. Getting into Johannesburg, I saw my first Mango plane – this is a subsidiary of South African Airways, colourful planes, colourful name.  Mango would be a great new brand for any luxury hotel company. 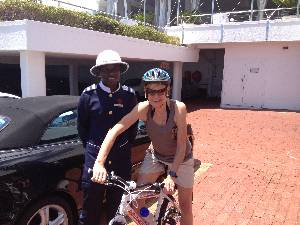 Avalanche bike with Shimano STI gears, at a hotel in the Cape Town vicinity

Continuing the gal’s transport around southern Africa…  take a British Airways flight, operated by Comair, for the best link between Johannesburg and Cape Town. Beforehand, the food in the Johannesburg SLOW lounge, which the airline uses, is superb.

Chilled carrot and dill soup followed by a cold pasta salad.  Luxury lifestyle food.  Any personal trainer would approve of this.  And after so much cavorting around, in and out of planes and hotel pickup vehicles, what a relief to arrive, and get on a bicycle.  Not any old bicycle, mind.

This is an Avalanche mountain bicycle with amazing Shimano STI gears I have not come across before.  You simply swing a lever round, as if on a spinning bike, to get the force you want.  Brilliant.  Now where AM I?  Watch this space for the next luxury hotel…