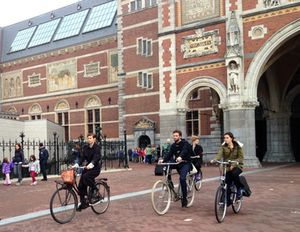 The Rijksmuseum is justifiably known for one of the world’s finest art collections, not only Rembrandts, Vermeers but everything through to a 1960s Mondrian-look dress.  The building itself is stunning, and even more so for its new-look.  First, a bit of history, says the gal – who has arrived there from her luxury hotel. What we see from the outside was designed by Pierre Cuypers and opened in 1885 (until then, the collection, put together as such in The Hague in 1800, had been here in Amsterdam since 1808, first in the Royal Palace and then in the Trippenhuis). 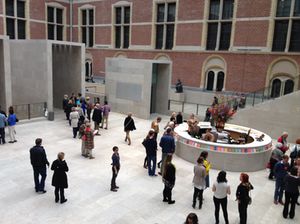 In 2001 the Rijksmuseum closed. On April 13th, 2013, it was reopened by Queen Beatrix – one of her last official acts before she abdicated.  Oh wow.  Among other enhancements, there is now a giant inner courtyard, roofed over, which is the main reception point, but the people-flow is such that there are no turnstiles or anything. There is a reputedly good café leading off this but, take warning, even on a quiet day there was about a 45-minute wait to get a table. The key is to go into the Rijksmuseum early, come out to find somewhere local for lunch, and then go back in again – tickets (€15, under-18s free, no other concessions) are valid all day long.  In the first 4.5 months since it reopened, over a million visitors have come. 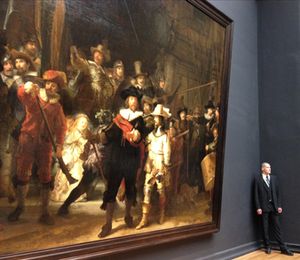 The Night Watch, by Rembrandt

Another tip – make sure those who are with you wear something bright, easily distinguishable.  With the crowds, and some Dutch art-goers the height of basketballers, it is easy to lose someone, at least temporarily.  Biggest crowds are for The Night Watch, Rembrandt’s 1642 masterpiece in one room at the end of the Hall of Fame corridor. Everyone is very considerate, standing in front of the painting just long enough to take a photo (no problem with this, as long as you do not use flash) and then moving along.  Either end of the painting a guard stands, looking day long at a melée of humanity rather than the subjects of the Night Watch. In a way they are similar, crowd and painting. The Night Watch, 142.9 by 172 inches,  was painted in the 17th century as a group portrait of a militia company, then part of the everyday life of the Dutch Republic, as it asserted its independence from the Spanish empire. But its subjects are all looking haphazardly, just as in real life. 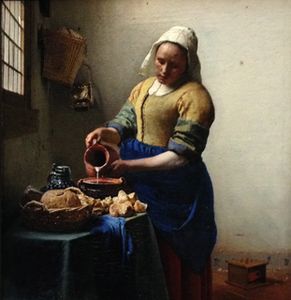 The Rijksmuseum’s renovation, by Spanish architects Antonio Cruz and Antonio Ortiz, ‘only’ cost €375 million. I would have expected it to be far more, in view of the building’s massive exterior extension, and new areas inside and fabulously sympathetic lighting throughout. Its major renovation patron was Philips, who deserve to sell millions more fridges and radios and televisions to the literati as a result: top sponsors also included bank ING which, like Philips, has a prominent dedicated stained glass window on one stairwell.  Back to the paintings. I believe in any museum it is better to concentrate on one section rather than the whole.  For me, here, it was Dutch Old Masters, like this delicious The Milkmaid by Vermeer: it is sometimes called The Kitchen Maid (painted 1657 to 1658, it is a mere 18 by 16 inches). 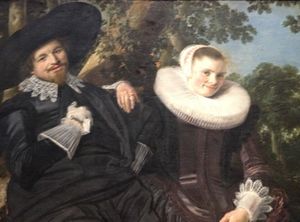 And I loved Frans Hals’ wedding painting, of Isaac Massa and Beatrix van der Laen – in some rooms, there are excellent explanatory boards that you can borrow, so here I learn that Isaac Massa’s collar is much more risky than that of an older contemporary, hanging next to him.  I am appalled by a pair of 1642 portraits by Bartholomeus van der Helst of a lean merchant, Andries Bicker, 1586-1652 (Mayor of Amsterdam, he made his fortune importing amber, furs and timber from Russia) and his shockingly obese 20-year old only son, Gerard Bicker, dolled up in rich fabric and lace d’oyley collars and cuffs. 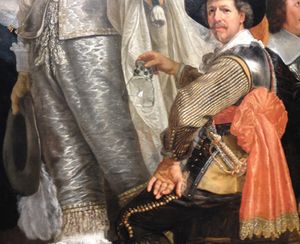 Bartholomeus van der Helst also painted another mega-scene, of The Night Watch size. This, The Company of Captain Roelof Bicker – as far as I can find out, no immediate relation to gargantuan-Gerard – and Lieutenant Blaeuw.  Here I concentrate on the men’s trousers and footwear.  There is a pair of silver damask trousers here, and a pair of tight salmon-coloured leggings there (this one with matching pompons on the shoes). The boots are, in some cases, Ugg meets Blahnik, their ankle cuffs finest leather sitting in perfect folds. Copies of some of these paintings will, incidentally, be hanging on the walls of the luxury hotel to which I now wend my way.