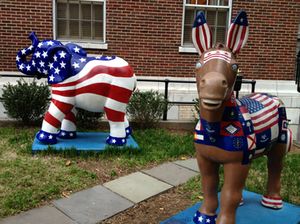 Elephant and donkey, at the University Club

As followers of Girlahead know, some manage to keep marvelously out of politics when it comes to thoughts and actions in the USA.  That luxury hotel The Jefferson, at the junction of 16th and M Streets, is where President Obama hosts first a group of Republican senators and then a group of Democrat senators.  Perhaps if he had put them all together it would have been a disastrous evening but, as two lots on two occasions, it worked just fine.  Sensibly, anyone staying at the hotel, as the gal was, can head across 16th Street to the city’s University Club to swim in its 100-foot pool.  In front of the Club are two painted animals, a Democrat donkey and a Republican elephant. 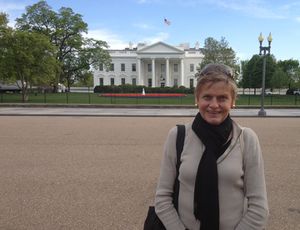 Two legs, in front of the White House

Cherry blossom time was short-lived this year: a wind blew it all away.  The crowds around the White House most of the time seemed as numerous than ever.   I love Lafayette Park, right in front, or rather to the north, of the White House.  General Jackson rears up on horseback, in statue style, in the middle of the park. To its north-east corner is yet another statue of the Polish soldier, Tadeusz Kosciuszko, 1746-1817, he who became an American general and who, in 1783, accompanied the Commander-in-Chief George Washington on his triumphant return to New York (we know all that, of course, from the statue of him in front of Four Seasons Philadelphia). 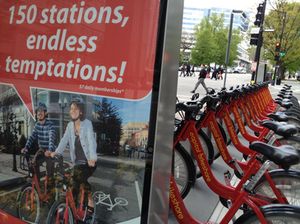 Travel is good for general knowledge.  Take city rental bikes.  The first place to put’em in was Paris, swiftly followed by Montreal.  London Mayor, Boris Johnson, copied the Montreal engineering when ordering what were supposed to be called after Barclays Bank (they sponsor them) but in fact everyone calls them Boris Bikes (he promotes them). Washington DC’s bikes, called Capital Bikeshare, or CaBi for short, also copy Montreal’s engineering, and, to serve more than 2,000 bikes, there are now over 200 pick-up and drop-off stations, all solar-powered (an earlier DC bikeshare system, SmartBike DC, failed as the stations needed electricity). You pay membership, from daily ($7) to annual ($75) and as long as you are only using a bike for under 30 minutes at a time there is no further charge. 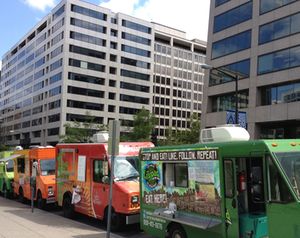 This makes CaBi ideal for commuters, and well over a million rides are taken annually.  All this bikin’ and puffin’ makes a gal, and anyone, come to think of it, jolly hungry.  While going, on foot, through the Foggy Bottom area of the city I saw a convention of food vans.  Was this a mobile food court, or just the drivers having a parlay before separating to go to their usual stations?  It is not surprising that so many Americans are, shall we say, NOT size zero.  It seems to eatin’ and drinkin’ on a continuous basis, for some.  I prefer proper meals, say a genuine hamburger at P.J. Clarke’s, on 16th Street between the Hay-Adams and the Jefferson hotels (its address is actually 1600 K Street). 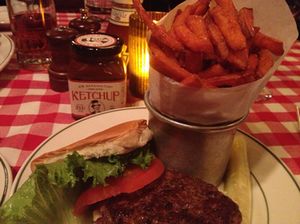 P.J,’s has a history that goes back to a squatters’ shack in New York in 1868, but it was upgraded to feed Irish labourers at a slaughterhouse.  In 1902 it was bought by Patrick Joseph Clarke, known as Paddy, and he made it into something really special.  Buddy Holly proposed to his wife at P.J’s, Elizabeth Taylor loved going there. This Washington D.C. branch is phenomenal, red and white check table cloths in what looks like a French brasserie, complete with French street names on the walls.  It has been nominated for a 2013 Rammy Power Spot of the Year – I swear I recognized a top television linkman at the next table. The Simply On A Bun burger, only $9.90 but pay for all sides, does come with a (free) spoonable ketchup that is just gorgeous.  You can go posh, with a Cadillac, with smoked country bacon and American (cheese) included. Wow, this one is $13.55 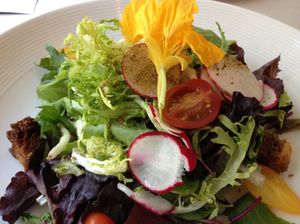 Too much food, everywhere…. it was such a delight to lunch at Juniper, in The Fairmont Washington DC Georgetown.  Here everything is about keeping fit.  The luxury hotel has brought in a CrossFit all-round training scheme that I cannot wait to try.  In Juniper, the chef, Mark Timms, who used to cook with Raymond Blanc at Orient-Express’ Le Manoir aux Quat’Saisons outside Oxford, England, gets most of his produce from a 150-mile radius.  His 150-mile salad, shown here, is a combination of mixed greens, fennel pollen radishes and nasturtium, to be blended with Amish honey vinaigrette.  There are, by the way, four working beehives on the hotel’s roof, so your bread is honey-bread, and the butter is flavoured with honey.  This all makes me even more keen to get on a bike and get even more exercise….