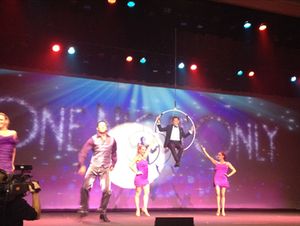 Albert Herrera descends from the gods

The third night of the main part of Virtuoso Travel Week VTW – the gathering of those running the best collection of luxury hotels in the world and the best travel advisors, putting their clients into those hotels’ beds – was hotel-centric. One Night Only celebrated the eight annual Best of the Best Awards. Over 130 round tables filled the Bellagio’s Grand Ballroom. The gal was at Albert Herrera’s table. But where was HE, the host? Well, trust Mr H always to surprise. Pre-dinner, during a really plausible Moulin Rouge-type routine, he descended from the gods on what can best be described as a parrot hoop. 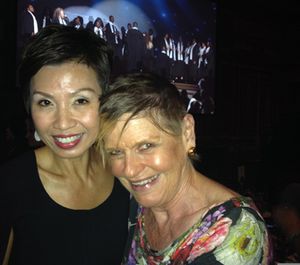 Hotelier of the year, Rainy Chan

It was an amazing evening. First, my table, with Jason Friedman (The Siam, Bangkok) to my left, and Peninsula’s Simon Yip to my right. Absolutely coincidentally, Rainy Chan, GM of The Peninsula Hong Kong, won the hotelier of the year award, chosen by the Virtuoso members – the roar that went up from the main Peninsula table could be heard throughout the room, and in her acceptance speech, so much more professional than those Oscars affairs where every member of a family seems to be thanked, Rainy Chan genuinely thanked, from the stage, Peninsula COO Peter Borer, and all her wonderful staff members. 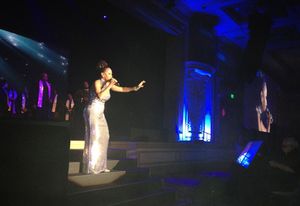 Other awards? Hotel of the year is Rosewood London, whose MD Matthias Roeke could merely bend down to the mike, from his height of 6ft 7ins, and whisper ‘I have lost my voice’ (he had also broken his toe). Shangri-La, the main sponsor of the dinner, saw Shangri-La Paris picked up the best culinary experience award, for its L’Abeille restaurant. Design award went to Four Seasons Hotel Lion Palace St Petersburg, St Regis New York’s King Cole Bar was best bar, Bulgari London won spa, and Anantara’s Qasr al Sarab Desert Resort, Abu Dhabi, got most innovative guest experience award. Sir Rocco Forte, who had flown in just for the night, saw his Florence property, Hotel Savoy, win best family programme. = 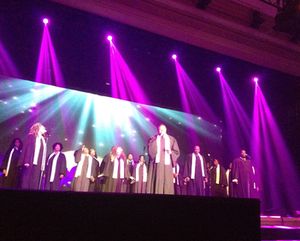 .. and a belting gospel choir

And after that, the show went on and on. There were soul singers and a happy, very happy, gospel chorus group – gosh did the men, and their female colleagues, belt it out. As Ana Marie Mormando, the Bogota-born head of this 3,950-room hotel says, her team (8,200 in total) can do anything, but when they need help, they know how to pull in the best professionals.