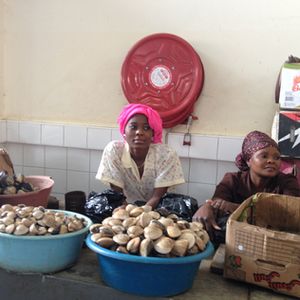 Time to explore Maputo, and thanks to the thoughtful arrangements of Carien Veldman – temporarily in charge of Radisson Blu Maputo while the GM, Fernando Gruenberg Stern, is away – the plan runs like clockwork. The Dana Tours guide is ready, waiting, as is the driver and his vehicle, and we gingerly make our way from Mozambique’s top modern-luxury hotel. No-one speeds in Maputo (formerly, in its Portuguese colonial days, Lourenço Marques, or LM) and the traffic can be appalling. The gal saw only four buses in a couple of hours and the only other form of transport are privately-run shared minibuses, chapas, like the serveezes of the Levant. 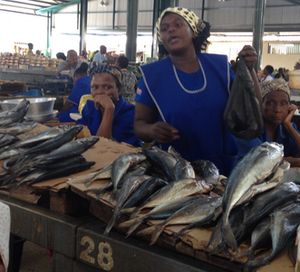 I was particularly fascinated by the city’s covered market, Bazar de Baixa, where most of the vendors are women – and so fashionable! Built 1901 and recently renovated, it is spotlessly clean, and even the fish sections are admirable. You know the fish is fresh (we had passed the fishing boats returning to port as we drove along Avenida 25 de Setembro, named for the start of the 1964-1975 War of Independence – a nearby street is Avenida 24 de Julio, for its end, and another is Avenida 10 de Novembro for Maputo’s national day). Actually I have been eating nothing but fish since I arrived in Mozambique, line fish and enormous prawns. Last time I was here I had prawns piri-piri, with hot chilli flavouring, as often as possible. 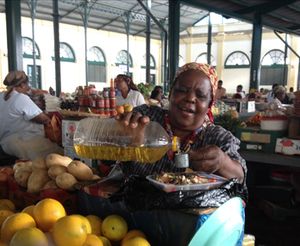 There is a chilli section here in the market and I am shown, but do not dare even to touch, the tiny red ones, all of a centimetre long, that are the ‘real killers’. Not far away a woman is putting oil on a prepared dish to-go. The purchaser has bought her own plastic dish. Apparently some customers bring their own scales as they do not trust those that the sellers have. I am fascinated by a young girl, bent over, straight legs, washing tomatoes in a bowl on the floor. People seem amazingly agile. We drive on. Along one section of road, maids’ uniforms, all white etceteras on black, or coloured, fabric, hang on wire hangers hooked on tree branches. 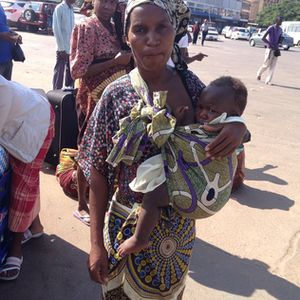 Near the railway station people come and go, on foot and often carrying babies wrapped in a length of capulana fabric. We go into the station, a delicious Victorian-style building dated 1910. Its double-height interior, decked in wedding-cake ‘was-white icing piping’ has its main sections in pale peppermint. There is a regular train to Johannesburg but it takes two days as you have to get out, change trains, and wait, at the border. Go by bus and it is eight-to-nine hours. Fly, as I am going to do, and it is 52 minutes, during which they manage to serve wraps and caramel creams, and a full bar selection. 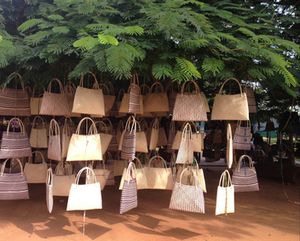 The outdoor craft market, near the Polana, is only memorable for the way a tree is used as display for handmade baskets. The Polana, by the way, is Maputo’s historic luxury hotel, 1922 vintage by architect Sir Herbert Baker, who also designed Reid’s Palace in Madeira. Now owned by the Aga Khan and managed by Serena, it has been lovingly restored at a cost of $250 million by two Chinese, Jian Qingde and Jiang Zhaoya. Think colonial, sitting on pale eggshell-blue wicker chairs with a sundowner, as the sun goes down… The servers wear yellow batik waistcoats and the tall doorman, as black as his uniform, has 396 lapel buttons all the way up those lapels, and around his top hat. 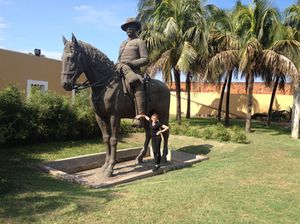 Maputo’s 1770 Fort of Senhora da Conceição, now reduced to six-foot outer walls around a grass patch the size of two tennis courts, has a couple of interesting statues, including an outsized Mouzinho de Albuquerque on horseback. We look across Maputo Bay, where ‘the Chinese’ are apparently going to build a big bridge. There is already a Chinese-frequented hotel, Sogecoa, now the ‘the Chinese’, in the form of Anhui Foreign Economic Construction Corp AFECC, are also building a 290-room hotel (Mozambique President Armando Guebuza laid the corner stone this January). There is  a Chinese restaurant across Avenida da Marginal from the stunning Radisson Blu luxury hotel….