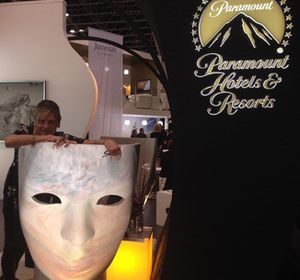 Paramount Hotels & Resorts does not actually exist in concrete form at the moment (apart from in the mind, says the gal) but already it is making a big noise. It had a big stand at this year’s tremendous Arabian Travel Market ATM, the sore-foot inducing event that everyone who wants to sell to, or from, the Middle East needs to be at. Paramount was showing what will be its first luxury hotel, the 777-room Paramount in Damac Towers, Dubai (later, says CEO Thomas Van Vliet, it will add 1,080 serviced residences in Dubai, and a 18-hole Donald Trump golf course with 162 villas). 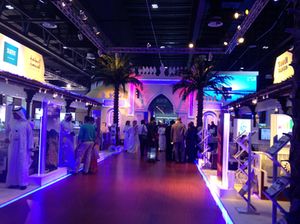 The exhibition seemed to go on forever

Think big was the message as one wearily trawled the enormous halls, trying to orientate in a confusion of two parallel halls with a half-mile green-baize-road between. There were oodles of figures being thrust around. Over 11 million visitors to Dubai alone last year, with a target of 20 million by 2020, but during the World Expo late 2020 it is hoped 25 million (additional?) will flood in.   That is what the very lucid Director General of Dept of Tourism and Commerce Marketing DTCM, one Helal Saeed Al Merri, certainly believes. Jumeirah’s Gerald Lawless says all this will create an additional 300,000 jobs. 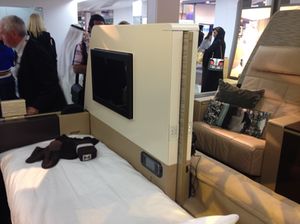 The Dubai, and other UAE, areas of the WTM halls were certainly crowded. The Big Bus Company had an entire open-topped double-decker tour bus in one hall, right next to what looked like most of a facsimile A380 on the Etihad stand. Etihad was showing off its new seating, including its Residence, which gives you a bedroom, a sitting room and a private shower-washroom (did they get the name from the Residence at Abu Dhabi’s Shangri-La, frequented by some of the airline’s managers?). There was such a line to see it that I only managed to see the standard First Class, which still looked pretty good, with a bed and a fitted armchair big enough for a sumo wrestler, or a potentate, or an ample sheikh. 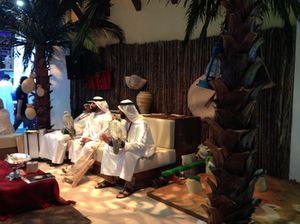 Falcons on the Abu Dhabi stand

The guys looking after falcons on the Abu Dhabi stand certainly had not an ounce of extra fat on them (presumably running after their birds keeps them scrawny, or perhaps they are on pale diets, all protein and no carbs. Global tourism remains vibrant, says a poll that Reed’s World Travel Market WTM commissioned from Euromonitor. The report says spending on travel is among the top three priorities for both mature and emerging markets: more interesting was the finding that classic luxury is coming back. For many, classic luxury certainly includes such pastimes as falconry, as at Gleneagles, though not with instructors wearing the dishdash, also known as thawb or thobe. 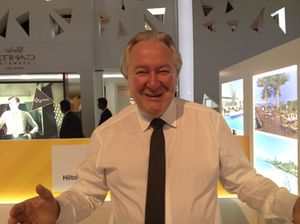 In Morocco, the Minister of Tourism, H.E. Lahcen Haddad, said business into Agadir is up 25 percent in the last year and Casablanca is becoming a hub for the whole of Africa. His Excellency took the opportunity, during his visit to ATM, to sign a three-year deal to host the global finals of the World Travel Awards, the bible for many luxury hoteliers, for the next three years.   After that signing, the Awards’ founder and President, Graham Cooke, more or less based himself at Al Ain Zoo, or at least at its no-animal stand. And that is where he will be at the next ATM, May 4-7, 2015