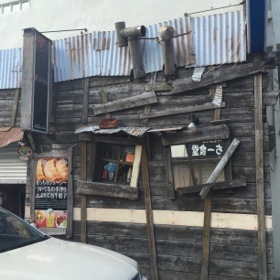 Most things in Japan are in the most exquisite taste – almost, says the gal, as if they cannot do the slightest thing, the smallest expression, to offend the onlooker. But just sometimes the pendulum swings so far the other way it is difficult to believe this IS Japan. The photo shows a restaurant in Ishigaki, the main island in an Okinawa sub-group known as the Yaeyama Islands. These include the most southerly place in Japan (Hateruma Island, population 535), and also the most westerly (Yonaguni, population 1,511). Ishigaki, by contrast, has a population of 50,000, which warrants a few substantial hotels, although nothing that could be called luxury. 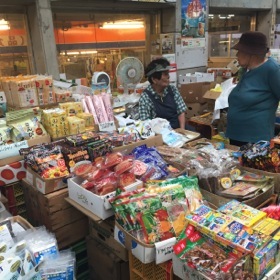 We walk the central streets, some of them so narrow that cars can barely pass. Because of earthquakes, all utilities, say electricity and telephone poles and wires, have to be outside buildings, so big vertical poles obstruct the streets right outside some doors. We head for the main covered market, and even though it is Sunday some stores are open. A lot of the shopkeepers are very old, but then Japan is well-known as an ageing society, thanks to fewer births and increasing longevity. And Okinawa has the longest-livers in the nation. They apparently eat a lot of seaweed, but they do not eat too much of anything. Nationwide, Japan eats 20% less rice than 20 years ago, and fish consumption is down 30% in a decade. 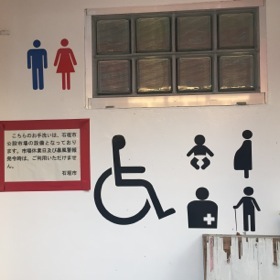 It gets worse. A mere one-third of the sake that was imbibed in 1970 is drunk now – are they switching to other alcohols or just going teetotal? Overall, average calorie intake for an adult has dropped from 2,670 a day in 2006 to 2,415 now. But old people with bladder problems are well taken care of. Washroom signs are ubiquitous. The chances are that you find, even in public facilities, Toto automatic commodes, sensor-operated taps at washbasins, automatic soap dispensers and hand driers so you do not need to touch anything with your hands at all. For hikers, they recommend buying keitai toire, ‘handy portable’ toilet packs, 450yen single and 550yen double, but whether or not that means one person once or twice, or two people one time, is not clear. What IS clear is ‘please do not use the undergrowth’. 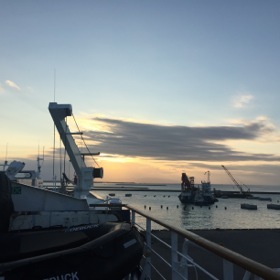 Back on board that luxury hotel-afloat, Silver Discoverer, I watched the sunset. And then it was time for the Captain’s Farewell, with a parade of staff in their uniforms (there are two married couples aboard – the one female server, an Indian, is married to another server, and our lovely Filipina butler Mary Anne is married to one of the other servers).