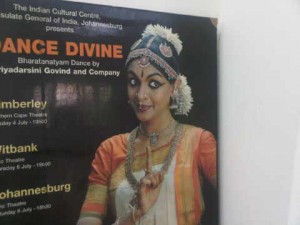 An alluring poster for Priya’s dance tour of South Africa

The art in and around the splendid new ITC Chola Grand Chennai is stupendous, like big, and notable.  In many instances heavy columns soar up through two floors, with walkways, as if unsupported, from one to another.

This means that to get to a bedroom, say 3201, one of the ways would be to climb 30 marble steps from the entrance lobby to the upper lobby and dance along one of these walkways (which fortunately have solid side panels to a height of about four feet) to another lobby to the elevator.  Time to leave the hotel, gal, for a short break to see REAL dance. 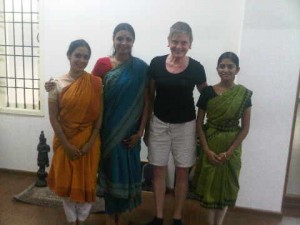 Priya and students, in her studio

And oh my goodness.  Priyadarsini Govind – call me Priya – is one of the world’s top exponents of Bharatanatyam dance.  She has toured South Africa and this year, during the Olympics, she danced at the Houses of Parliament in London, I suspect on a terrace rather than in one of the two legislative chambers inside.

She invited me and my new friend Chitra Mahesh, who had already taken me to the Government Museum, to her studio in Chennai.  If you did not know the way you would never find it – down a leafy side-street, edge round behind cars parked in front of a house, skirt between building edge and some tropical plants, down a side pathlet and in through a door.   There she was, with two students. 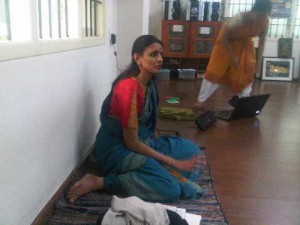 Priya sits, in yoga position, ready for the lesson

Ideally a girl should start dancing, says Priya, at six or seven, and it will be at least seven years before she can dance in public.  Her first dance is the equivalent of a bar mitzvah, showing all she has learned, and all her family will be there to watch.  Every single movement, from head and eyes down to toes, is historically structured.

Today’s Bharatanatyam, a specialty of this state, Tamil Nadu, and its capital, Chennai, evolved from 19th and 20th century versions of Sadir temple dance, which in turn comes from earlier forms. 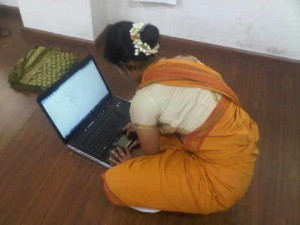 One student gets the music ready on the laptop

It is usually performed to classical music. Bha stands for Bhayam, expression.  Ra is Ragam, music.  Ta is Talam, beat or rhythm.  Natyam is dance, in Tamil.  The dances recreate the story of Shiva, many of whose statues I had seen in the Chola collection in the Government Museum.

Now I learn more.  Shiva is the god of destruction and he wears bangles with nine precious gems.   The dance represents the same shapes that I saw on those statues, representing grace, purity, tenderness in different guises. 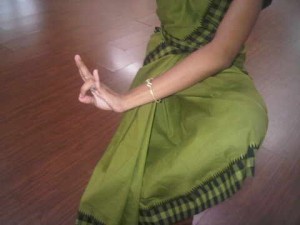 Another student holds a pre-dance pose…

Priya sits in yoga pose on the floor of her studio, takes a stick and bangs it firmly on the ground.  Her two students immediately fall down, forehead on the floor, as if in obeisance (she tells me no warm-up is needed, only a few minutes of martial arts).   Then one of the students crouches down to operte the laptop, to produce the right music.

The other, a waif of a thing who looks, as my grandmother would have said, as if she could do with a good meal, starts dancing.  At first it is very gentle, but with lots of exaggerated hand movements. 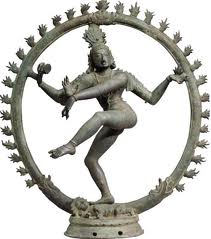 .. that reminds me of Chola statues in the Government Museum

Soon, as if a whirling derwish, she becomes increasingly animated, at one point strutting across the floor, walking or nearly running, putting her bare feet down heel first, and then rest of foot, and progressing to slapping her feet down so hard it sounds as if she being hit with a whip.

I think back to a Shiva statue, one of so many in the Government Museum, and just as the statue looked as if it would move any moment, so this dancer is bringing the story of Shiva to life.  I just wish I knew what every gesture means. 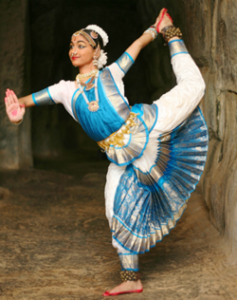 In ‘proper’ performances highly elaborate costumes, and makeup, are the norm

She is in practise gear, her sari wrapped up around her waist, and she wears exactly the same kind of ankle-length leggings that you see on Fashion-TV being worn around the world as highest vogue, right now.

Were she performing in public, she would be wearing the most exotic gear and elaborate makeup.

And after my private viewing, I went back, with a big smile on my face, to the luxury hotel that is ITC Grand Chola Chennai.