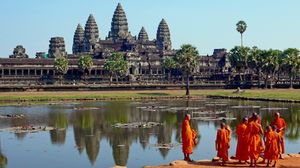 It is 150 years ago this year since what is known as Angkor Wat – technically, Angkor Archaeological Park – was discovered in 1864 by French naturalist and explorer Henri Mouhot, but the people of Siem Reap are pretty nonchalant about it. Fly into the airport, which warrants ‘international’ status even though the city’s population is only 174,000, and there are no anniversary banners. Best way to arrive, by the way, is for a personal plane-side meeting, as arranged by Anantara Angkor. This luxury hotel makes it possible for you to be nannied by an immigration official who whisks you, as if a king no less, through immigration. The gal says such specials are what differentiates one place from another. Among Angkor’s ruins my favourites are the friezes at Bayon, Phnom Bakheng and the fig trees growing through Ta Prohm. 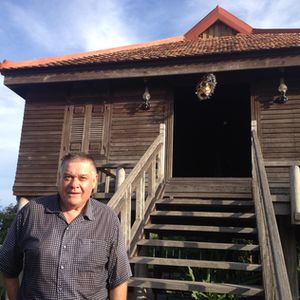 But this visit I wanted to know more about Khmer – Cambodian – history and lifestyle. Anantara Angkor arranged a visit to Darryl Collins, an Adelaide guy, a historian who got into museums and was part of Premier Paul Keating’s Australia-help-Cambodia task force in 1994. His task was to help restore Phnom Penh museum, until funding was cut off by subsequent Premier John Howard (‘very insular’, says Darryl Collins, who has lost none of his Aussie twang). He fell in love with Cambodia, had all his belongings shipped ‘to Sihanoukville’, even though Sydney longshoremen had no idea where it was, and now he lives in a wood house-on-stilts, in a small field with three scrawny cows on long reins, in a field 30 minutes’ drive from the hotel. 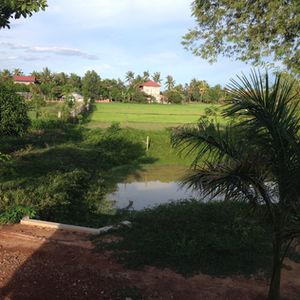 View from his house

An architect friend suggested he buy a dilapidated historic Khmer house, transport it here and rebuild it, exactly. This is what he did, not only once but three times. One house is now rented out, to the GM of Amansara, Sally Baughen (he’s a great landlord, she says). Two of the houses, one originally over 100 years old, the other 104, are here in this field: one he lives in, one is his guest house. Look at the view, as you wake up and check your surroundings. It might be quiet as anything, but my visit coincided with a village wedding, which meant loudest-possible local pop music blaring out in bursts, for days on end. 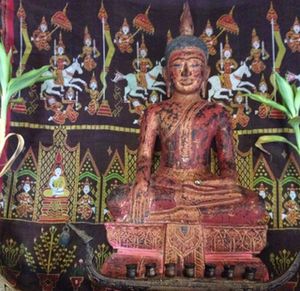 One of his Buddhas

Houses were formed of Cambodian hardwood, mainly teak. They were raised on stilts, about eight feet above the ground, to ward off floods and rodents, and that ground area was used for storage, and outdoor eating. The main house is one big room, wood floor, wood columns rising high to an open cathedral type ceiling, around 20 feet high, perhaps with a clearstorey half way up the unlined terracotta tile roof to add draught to air movement allowed in through the many shuttered windows. The kitchen was in a separate small room off the main room, which would have heavy wood furniture, and perhaps, as Darryl Collins has, a Buddha with small shrine. 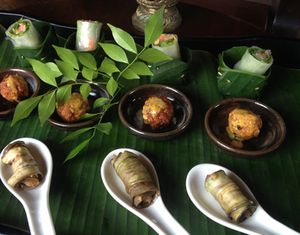 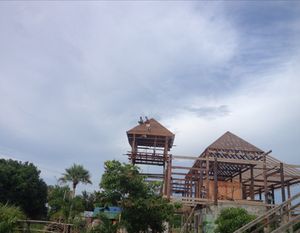 Roofers on his neighbour’s construction have no hard hats, no harnesses

Darryl Collins’ enthusiasm has rubbed off on an Aussie friend who is building a new house next to him, in the field – see those three guys tiling the roof, without hard hats or safety ropes? Darryl Collins, by the way, co-authored a fascinating Toyota-sponsored book, Building Cambodia: New Khmer Architects 1953-1970, now sadly out of print. He shows me his one copy, pointing out some of the typical-60s concrete constructions by, say, Vann Molyvann (born 1926, he got his doctorate in 2008 and is now desperately trying to preserve some of his finest buildings via the Vann Molyvann Project. I could not see any luxury hotels in the book – Siem Reap’s grand old lady, the forever-young Raffles Grand Hotel d’Angkor, in fact dates back to 1932, although it had been envisaged as early as 1923 when Ernest Hebrard, of Town Planning Service of Indochina devised the Ecole Française d’Extrème-Orient master plan for hotels to emulate the Grand Tour of Europe.