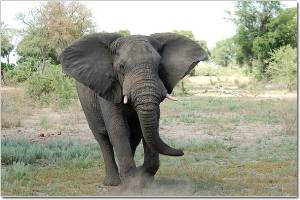 Thirty years ago African elephants were an endangered species but now, in the Okavango Delta of Botswana, there are, it is reckoned, over 120,000 in three areas of the 2.7 million-acre Chobe National Park alone. What has happened?

Why, when their numbers are depleting elsewhere on the continent, are these animals, that can rush at up to 30 miles an hour when angry, becoming such a ‘threat’ in this area that some dare to talk about culling, or sending them to other countries.

After her stay at that luxury safari lodge Shambala, north of Johannesburg, the gal wanted to find out more. 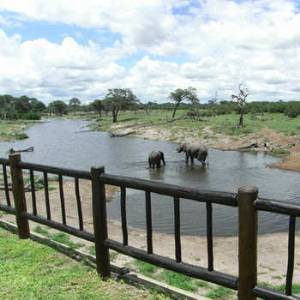 These Kalahari elephants are bigger than their Indian counterparts and they have much bigger ears.  These are primarily cooling fans – it was 42 degrees when I flew into Maun yesterday, on the very friendly Air Botswana daily service from Johannesburg.

Elephants’ ears are of course used for hearing too, and are amazingly sensitive of sound; apparently they pick up war sounds, do not like what they hear, and run, or rather plod away. They also hear the sound of poachers from afar off, and similarly relocate.

It might take a very long time but they have moved here to Botswana from, say, Angola.   This was verified by a tagged elephant that walked west from Botswana along the Caprivi Strip to Angola, did not like that he or she saw, and walked back again.  Typical walking pace, by the way, is just under three miles an hour. 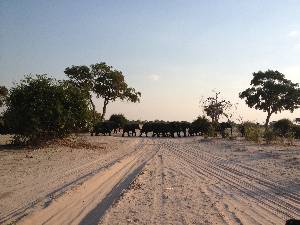 There are so many elephant you are often, literally, stopped in your tracks

Elephants do not have good eyesight but they benefit from a superb sense of smell.  Their entire trunks, which are all muscle, are noses. They put their trunks down to suction up water, if they can find any, and then they lift them up high to smell all around.

They also use their trunks to forage.  Here in Okavango they are particularly fond of the mopane tree. They wrap their trunks around the bark and bite it off, which means that there are hundreds of acres here in the park that are dotted, densely, with trees that have all been shorn, as if by electric cutter, at a height of about five feet (if you want to protect a young tree, wrap it entirely in chicken wire).

They also like acacia but they find fever berry trees too bitter, and eating fever berry leads to diarrhoea. Ergo, the only tall trees are fever berry. 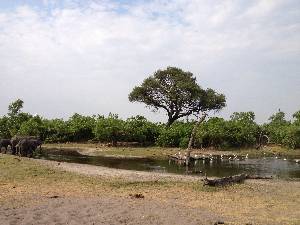 Here elephants, to the left, share the picture with masses of birds

What else about these fascinating animals?  They love rolling in mud or, if that is not available – it has not rained here for nine months – in dust.   They can sleep lying down, no fear. And if you are asleep and there is a chance you may be awoken by loud trumpeting, low belly rumbles or even, thanks to that high-fibre diet, other ‘unmistakable’ sounds.

Interestingly, they digest only 40 percent of what they eat, so their output contains lots of nutrients for other animals. Generally there is no worry in elephants’ lives, as long as they can find enough tree bark and water, until they get old, like about 65.

From the moment they are born, they live in a matriarchal pack.  They are weaned at about three and a half years and after five years their mum might get pregnant again – gestation is 22 months and twins are very unlikely.

But at the age of eight there is no space for little boys any longer and they are kicked out, which is when the older males, who have lived separately all this time, come into action.  They take over mentoring of the young males, who become fertile at 15 (females are fertile at 13). 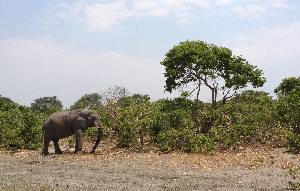 Yet another elephant (but we love 'em)

How do you find out all these things?  I ask my new friend Onx Manga, environmentalist for Orient-Express Safaris here in beautiful Botswana.  He tells me that several young orphan males were introduced into a South African park that hitherto had no elephants.

Quite soon they were finding dead rhino.  Why?  A ranger happened to see one of these testerone-fuelled teenagers trying to mate with a female rhino, who not surprisingly rejected him and he, in anger, killed her.  The simple answer was to introduce a veteran male elephant.  They did this and, hey presto, no more dead rhinos.

Onx is full of stories.  He is an extremely bright Maun Man who studied both tourism and wild life and got hired by Disney on an 18-month contract in the education department at Walt Disney World’s Animal Kingdom in Orlando.  His tales of that time are, well, hilarious and ripe for telling at another point… 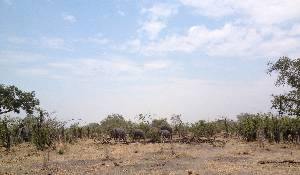 Now he is in charge of the rangers at all three of Orient-Express’ beautiful lodges in the Okavango Delta, and he oversees the environment and general quality.  I am at Savute, the 12-tent luxury camp that Orient-Express owns in the Savute park.

Tent six, Zebra, is the highest-quality tent I have experienced since Four Seasons Tented Camp in northern Thailand.  It is about 400 sq ft total, built on three foot-high wood platform with front deck right by the 20-foot wide Savute Channel.

I do have PVC walls and raised roof, but I have a California-size four-post bed with mosquito net, full electricity and free WiFi, and a minibar and safe and indoor and outdoor showers. 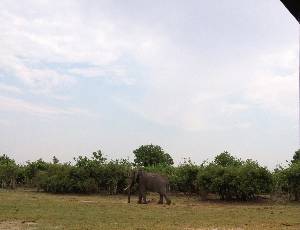 An elephant walks away by itself, when it knows it is OLD...

The Kwando River’s Savute Channel offshoot was dry for a few years until 2010, but when it flowed again it brought masses more wildlife, like buffalo, to the area.  Typically, stay here, and you have come to see that wildlife, and you need a ranger who knows what to find where.

Today, as always, at 0530 I was brought boiling water and a coffee plunger, and a hot muffin. After a superb breakfast, which a vervet monkey wanted to share, it was off at 0630, and in three hours we saw buffalo, gazelles galore, giraffe, hyena, lion, warthog, the very-rare wild dogs (also known as painted wolves), zebra – and, of course, thousands of elephant.  And, sadly, carcasses. 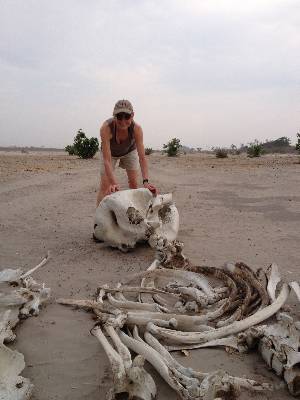 Sadly, sometimes this is all that remains

Baby elephants succumb to high mortality rates here.  After about a day the lion move in, and after  them the other animals. But what happens to the elders?  How thoughtful these animals are.  Wrinkly males are probably by themselves anyway, unless they are mentoring.  But wrinkly females, invariably the leader of a pack, know when their time is up.

To avoid inconveniencing the rest of the pack, they simply walk away – I suppose they say goodbye – and then, well, die. And the next-in-line age-wise becomes head of that group.   Fortunately, here at least, in the beautiful Okavango, there are masses more elephants coming up. No-one here, by the way, rides them.

If you want that, head to Shambala or take a trip to Northern Thailand, for the daily mahoot session at Four Seasons Tented Camp or the annual elephant polo tournament at another luxury hotel up there, Anantara Golden Triangle.

I hear also that Naomi Campbell is arranging an elephant polo match for the 50th birthday party of her Russian boyfriend Vladimir Doronin, at Taj‘s Umaid Bhawan in Jodhpur (which is where Elizabeth Hurley got married and look what happened to THAT relationship).  And on a more serious note, I hear China’s basketball star Yao Ming has become ambassador for elephant conservationists trying to persuade the Chinese not to want ivory…