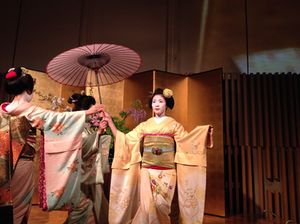 Maiko geishas, in a dance

You don’t see such exquisitely-dressed ladies as these every day (obviously we are in Japan – are we in a luxury hotel?). These are maiko, trainee geishas under 21. Maiko are a specialty of Kyoto, and from the age of about 15 they learn how to dance, play three-stringed shamisen and learn the Kyoto dialect, kyo-kotoba. Their hairstyles, with their own hair, are styled from the Edo period, and they wear kimonos with trains, and five-metre darari-no-obi belts that hang to their ankles. As Mineko Iwasaki, the inspirational character for Arthur Golden’s Memoirs of a Geisha says ‘The whole idea of geishas is perfection’. The gal is fascinated. 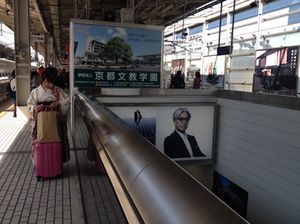 Waiting for the train, a kimono-clad graduate to the left

I am waiting at Tokyo station for my train (fortunately a young bellman from Mandarin Oriental Tokyo is going to put me right on the train, to make sure I am on the correct Shinkansen, in the right car, in the right seat). Near me stands a young lady in a hakama, a simplified kimono that is worn at graduation ceremonies. Although you cannot see it very well in the image, it is high-waisted, and has its own waist-tie, and it falls to the floor.  Originally hakama were worn only by men but now, for graduation ceremonies, women’s hakama are often floral.  You see fascinating things at Japanese rail stations – love the contrast between the hakama-wearer and the poster to the right. 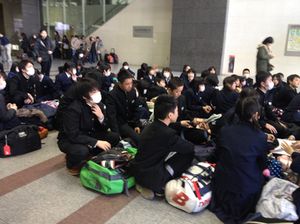 School kids waiting for the train

On the way through Tokyo station my minder and I passed a group of school children waiting to be called to their train. The boys wear almost military-style uniform, high-necked black jackets with gold buttons. The girls wear pleated skirts, and short ankle socks.  It is an incessant surprise to see how many of them appear, by the presence of face masks, to have head colds, or are they worried about air pollution?  Oh Japan, you are eternally different, and in a lovely way, from the rest of the world.  Wait for a train in UK or the USA and people with colds might sneeze right in your face. 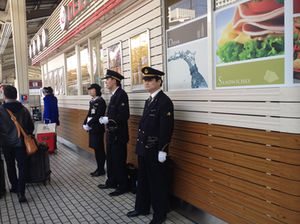 The guards have arrived, in plenty of time, for my train, which originates in Tokyo. Three minutes after its predecessor leaves, on the absolute dot of stated time, my train will arrive.  Ten minutes earlier, however, the guards have appeared. They bow to each other.  When the train comes, they will bow deeply to the guards getting off that train, who return the bow (if in doubt in Japan, bow to anyone, it never hurts).  This is a country where politeness is universal, and it is catching. I find myself bowing to my young minder, who tells me he wants to be a General Manager of a hotel and he thinks he will learn both sign language and Mandarin, to help further his career. 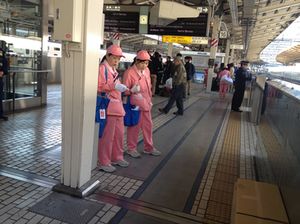 .. as do the fashionably-dressed cleaners

Also waiting for my train are the bevy of cleaners, ladies in pink, with baseball caps and wearing trainers. One, the head lady, wears a hard hat. The moment the train has arrived, the incoming passengers have disembarked and the bowing is over, the ladies in pink (NOT to be confused in any way with Kempinski’s famous Ladies in Red), board their allotted coaches and, at lightning speed, run up and down, some with dustpans and brushes, cleaning and tidying.  Ms Hard Hat collects all their trophies, empties the plastic garbage bags from the end of the carriage.  She unfolds a tiny blue package into a giant holdall, puts all the debris on this and is the last to exit.  As she does, she turns to her right and bows along to the station guard, standing by carriage ten, and the door behind her closes. 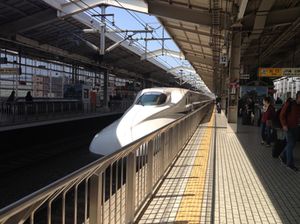 And the train arrives

Once all carriages are cleaned, the guard opens all the doors and passengers, in neat lines of course, board. The train is ready, the guard checks his watch, and then checks the platform clock.  Absolutely on that dot, he blows his whistle and the train whirrs away, with its guards aboard (he, the platform guard, awaits the next train, arriving in three minutes…) These are definitely among the, if not THE, best trains in the world.  Would that luxury hotels could operate with such efficiency, and with such team spirit.