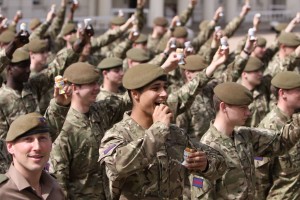 A hundred soldiers eat boiled eggs and 'soldiers' for a world record....

Well, the gal gets ready to leave London and its best Sunday brunch just as all hell is let loose there (why does that guy who heads disgraced Barclays Bank, one Bob Diamond, he who refused to lower his millions and millions salary and now is ultimately responsible for the bank’s disgraceful and unethical doings, always wear a red scarf, cannot he afford another outfit?).

Fortunately there are one or two elements of Fun in The City.  Yesterday a hundred Number Seven Company Coldstream Guards ate boiled eggs and soldiers (that is to say, finger shapes of buttered toast) at Wellington Barracks.

This got’em into the Guinness World Records for something or other. Apparently London is into breaking records, via World Record London.  First time of hearing, sounds good and much better than the Olympics. 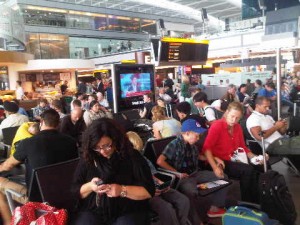 .. and many more than a hundred hang around waiting at Heathrow, to leave London 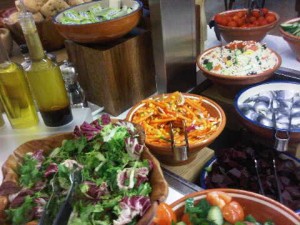 Londoners do love going crazy (but it is odd that this is the first time one hears of World Record London, and this is only thanks to a US-based PR company).  The world also goes crazy, at Heathrow.  The world and his wife, and his mistress and friend, relations and hangers-on, hang on and hang in to join the crowds at all the terminals.

The only things that are good here are shopping – buy Bobbi Brown, less expensive than airlines’ duty-free – and some of the restaurants, notably Carluccio’s and Caviar House Prunier.  Since terminal two is being rebuilt, there is even more pressure on terminals one and three, which have taken two’s hoi polloi.

Terminal four was OK when it was mainly British Airways but now it has airlines one has never heard of… Terminal five was built solely for British Airways.  It was designed by Richard Rogers, husband of the brilliant owner of London’s River Café, Ruth Rogers, and when it opened it had space.

Now it too is over-crowded, and not only because British Airways’ partner Iberia uses it too.  You cannot imagine luxury hotels trying to cram in as many people as possible.  Luxury is space. 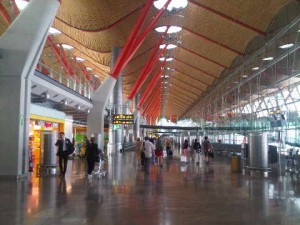 By comparison to the airport norm, Madrid is so large you think you are walking to Barcelona...

The only way to keep sane flying through Heathrow is to have flown British Airways so much that your loyalty card rises up to the basic Gold level and then you can use the divine Gold lounge.  The food here is superb.

There is plenty of space and you can while away lots of hours, a glass of Taittinger in one hand as you skype away to the other side of this wonderful world.  Yes, this restores your sense of humour.  And Brits do have that humour, as evidenced by the records above. 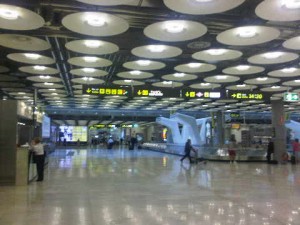 .. and if you have baggage to collect you walk another few miles to find the right belt

Few in authority seem to realise how important airports are to luxury travel.  Those who use private jets never see the hurly-burly of the common crowd.  Arrive at Madrid’s Barajas airport, however, and you realise that actually sometimes you can have just a little too much space.

Richard Rogers also designed its terminal four, which was then built by Ferrovial, the Spanish company that then bought up BAA, the widely hated operator of the aforementioned Heathrow.  So far terminal four has not become overcrowded.

The authorities say it is meant to give passengers a stress-free feeling through careful use of illumination, with glass panes instead of walls, and numerous domes in the roof which allow natural light to pass through. And so, the gal’s advice on travelling to Madrid:

Wear comfortable shoes, it is a good 15 minutes’ walk, even on people-movers, to get from your arrival gate at the airport to the train, which then takes you on a 15-minute journey to baggage pickup. And do not chat to your friends as you make this trek or you may miss a vital Exit sign, in which case you could be Lost in Translation, seemingly forever. And now for luxury hotels in Spain. Watch this space.