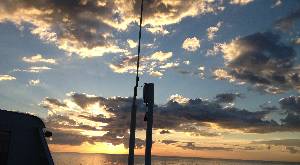 Put the clocks forward one hour from Buenos Aires to Montevideo, and boy, what a sunrise.  The gal was up on the deck of one of the best luxury hotels in the world, the floating resort that is Silver Cloud.

On any cruise, the first day there are many passengers with good intentions who are similarly up walking the deck, working out in the gym (LifeFitness, open from 0630) and swimming in the seawater pool. Invariably, by day two you know that you, the fit one, might well be alone up there working out at that hour. 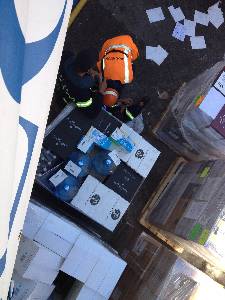 All day long, docked in Montevideo, we are loading up supplies.  Cases of Dom Pérignon are watched over by a local agent in tight-fitting blue and white striped overshirt and white trousers.

I realise I am looking at quarter of a million dollars’ worth of fine wines and spirits down there on the quay…  on board, they have now switched to having several brands of Champagne available as the complimentary pours in the bar, though if you ask for Dom Pérignon you will, not surprisingly, pay for it.

The ship is so flexible. Unlike other ‘all inclusive’ cruise lines, Silversea offers wide choices of tea blends, and the range of coffee gives you everything from good espresso through to Americano, the best for a ‘real’ breakfast coffee.  OK, Montevideo, here we come… 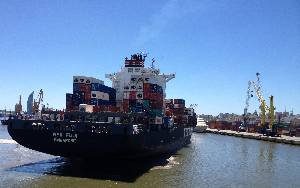 Montevideo port has ships from all over the world

Montevideo is a busy port, presumably exporting the beef for which Uruguay is famous. There are cargo ships galore, and one small cruise ship that is even smaller than Silver Cloud.  A couple of massive Costa ships come in.

There were four Costa ships at Buenos Aires yesterday, transporting ithousands of Argentinians north to Rio for the holiday season.  You appreciate the compactness of Silver Cloud when you see these ‘monstrosity of the seas’ floating apartment blocks on the horizon and getting frighteningly large as they get nearer. 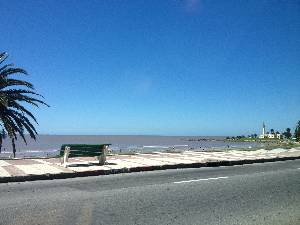 The Montevideo beaches attract visitors from all over the continent

We go ashore, and take the ship’s shuttle bus to the Sheraton, and then a taxi along the coast, east to the chic suburb of Carrasco. I am told 190,000 Argentinians flood into the Montevideo area for the holidays and many of them are already on the beautiful beaches, Playa Ramirez and its neighbours.

There are running and cycling tracks parallel to the coastal road, which turns from Rambla Rep. Helenica to Rambla Rep. Argentina and thence to Rambla President Wilson.

Paracourse equipment is set up every couple of miles and I am reminded of Rio, and how well-used the pieces of equipment are at Copacabana Beach, north of the marvellous Copacabana Palace, which has just had its lobby redone. 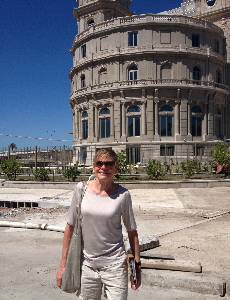 Dressed in camouflage at the forthcoming Sofitel Carrasco luxy hotel

I am actually on my way to see another restoration, that of the Casino Carrasco Hotel.  When it opened in 1921 it would have been five miles out of town, and it would have stood alone, gracing the empty patch of Carrasco beach front.

Now it is surrounded by Montevideo’s most elegant residential and office complexes – the whole Carrasco area oozes wealth. The huge hotel was supposed to re-open in time for Christmas, I was told, but the year has not been specified. 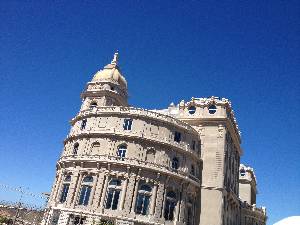 I am not allowed up to the building, but a friendly guard shrugs his shoulders with resignation when I ask when it will be ready. Tomorrow?  Next month?  Who knows?

When it does open, as Sofitel Montevideo Carrasco Casino and Spa, it will have 116 bedrooms, many of them with amazing Atlantic sea views.   Sensibly, the massive casino is round the back, not visible as you drive up what will be a one-floor high entrance.

This will be yet another luxury hotel in Latin America.  I think of my favourite Sofitel on the continent, Sofitel Santa Clara in Cartagena, and realise it is a full year since I was last there.  Gosh time flies when you are enjoying every day.