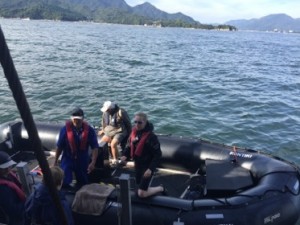 A zodiac gets ready to leave Silver Discoverer

One of the main points about ‘expedition cruising‘ is that you do go on expeditions. In the Arctic these are sometimes exhausting, and very cold. In Galapagos you obviously go on expeditions to see that unique collection of wildlife that every luxury traveller should experience at least once in a lifetime. In both these areas you leave the floating hotel, also known as a cruise ship, either by the gangplank to a dock or, as many prefer, by inflatable zodiac. There is certainly a sense of adventure in zodiac travel. On Silver Discoverer, moored off Miyajima, the gal and her party were taken by zodiac to the beach for a dry landing, which means feet should not get wet. 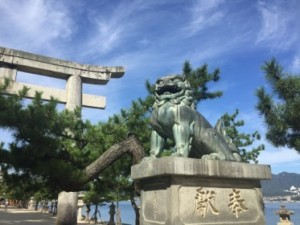 Walking along Miyajima to…

Miyajima is said to be one of the three most scenic spots in Japan – it is also a gourmet paradise as they farm oysters here, and extensively. Ships, indeed, have to avoid the straight lines from which oyster cages hang vertically into the water. Once ashore, you pass stalls selling oyster curry bread rolls for about two dollars each, but no I did not try one (many others snacked, once again, on icecream, which the Japanese do to perfection). We walked along a seafront road with barely any traffic, just lots of neatly sculpted trees, and stone statues. Little side streets, away from the seafront, were as narrow as back streets invariably are in Japan. 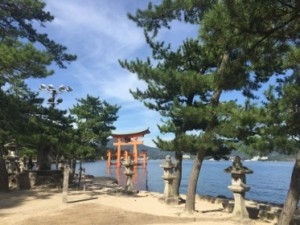 And then, ten minutes’ walk from the zodiac landing, we saw the famous O-torii (Grand) gate, appearing to rise up out of the sea. As always with the expedition team onboard this cruise, they had made sure we arrived at high tide to see the gate to best advantage. At low tide, apparently, you can walk right to it, which must reduce the emotional impact. Still walking, we reached Itsukushima Shrine, a massive wooden temple that is built, on stilts, over-water. The shrine, in a classic style known as Shinden, has been here since the early sixth century, and was rebuilt in 1168 – come forward to 1996 and it was recognised as a World Cultural Heritage site. Today we were lucky in seeing a bridal party arrive, the bride and groom in traditional kimonos, and the men among the invited guests in black suits, white shirts and white ties. 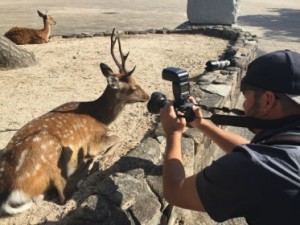 On our way back to pick up a zodiac shuttle to return to our luxury floating-hotel, we passed some of the dozens, if not hundreds, of deer who wander around Miyajima. Because the area is thought to be sacred, they are protected, and dogs, such necessary companions for many adults around Japan, are not allowed. Agriculture is similarly forbidden, as it would damage the land. We get back to our ship and, as always, are welcomed home with chilled terry towels, and flutes of alcohol-free fruit cup or the Vranken family’s Monopole Heidsieck, said by Wine Spectator to have “A rich, smoky base of roasted walnut and toasted coconut; lightly creamy in texture and well-balanced, with juicy acidity backing hints of glazed apricot, crème de cassis and grated ginger”.