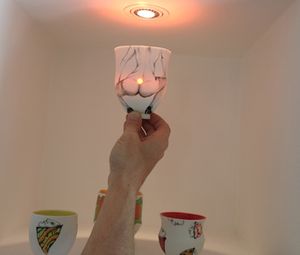 Lit from inside, the ‘person’s backside lights up…

Hold this whimsical china pot up to the light and see how it shines through… yes, this tooth mug would delight any hotel guest but which luxury hotel would dare to buy something like it?  The ceramic tooth mugs at Radisson Royal in Moscow are said to have cost $150 each, reputedly because the owner had to spend the overall same amount fitting out that 505-room hotel as he had on the overall construction and fitting out of his 546-room Mardan Palace, in Antalya, which allegedly cost $2.5 billion. 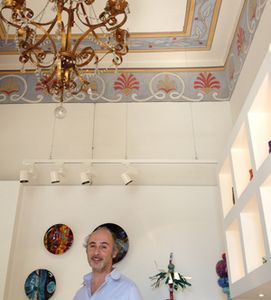 Back to this particular art item (for that is what it is), yet another creation of Marino Moretti, Orvieto’s best-known ceramic artist.  He designs and throws the shapes, bakes them and decorates them.  Want anything special, from a single drink coaster to a four-foot tall deliberately-distorted pot?  For years his signature decoration has been witty mediaeval figures, say a hooded woman in a long gown balancing, as if her body were a banana, on one hand.  For years professional students of majolica and terracotta art have come to his studio, in a ninth century castle ten miles from Orvieto, to study with the master.  Now he is spending more time travelling to exhibitions of his work, say in Qatar. 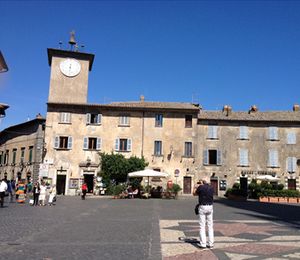 His new shop is to the left, at the base of the tower..

Marino Moretti and his Australian wife Marilyn have also taken over a traditional ceramic store in Orvieto’s main square.  It used to belong to his aunt, and the name over the door still implies the typical ‘tourist ceramics’ that you find in every other Orvieto store.  You know the kind of thing, gaudy apple-green china trays painted with yellow lemons, an item that looks oh so lovely here in Italy but where are on earth are you going to put it when you get home?  But Marino Moretti’s unique work has so many regular followers who now know about his new shop (in the photo it is the unmarked shop at the base of the tower, to the left) and they call in to see him. Others, intrigued by what they see through the open door, come in and buy or commission. 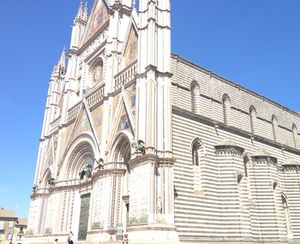 .. to the right is the distinctive Duomo (it is hard to see the gal!)

Orvieto is in Terni Province, in Umbria. Its main square is a gem, dominated by the Duomo (cathedral), which goes back to the year 1310 when it was designed by architects Amolfo di Cambio and Lorenzo Maitani.  Day-long it attracts tourists, who mostly make merely a day-trip, so they only see the Duomo in bright sun when the gorgeous west front looks almost white – yes, the gal is in the photo, but her pale taupe hat and top blend, chameleon-like, with the Duomo.  Which comes first, chicken or egg?  Day-visitors do not need luxury hotels and if there are no luxury hotels a town does not attract high-spending travellers who want to stay overnight.  Ergo, anyone staying over has to make do with a bed-and-breakfast, or head out of town, perhaps to La Badia, in an eighth century abbey. 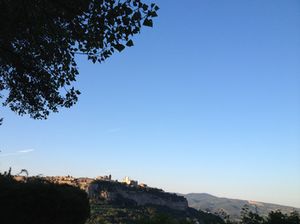 View back up to the Duomo

I was taking a break from luxury hotels and staying with dear friends a couple of miles south of Orvieto.  Look high up to this once-fortified town, perched atop a volcanic stump some 200 feet high.  Up there, streets are narrow and cobbled, and houses are tucked in and around each other like pieces in an advanced jigsaw.  For the most stress-free experience, stay ‘down on the ground’, with the space of vineyards and olive groves around you, and, as sunset approaches, savour the sight of the Duomo turning a glowing gold. 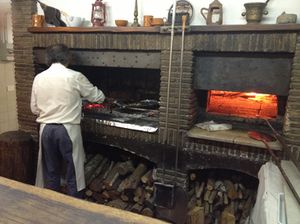 A Girlahead tip.  Some Italian hilltop towns – fortunately including Orvieto, and also Perugia – have invested heavily in public parking.  Orvieto’s two-level park is halfway up the hill, and from there you take a lift to emerge right in the centre.  Another of the town’s pleasures is then to walk the streets choosing which restaurant to dine at, seating inside or out, to watch others also debating where to eat.  Some of the most memorable places are in deep cellars that once housed, say, rope manufacturers: today these rooms offer several dining venues and they might, cleverly, have a real old-fashioned pizza oven.  Now which luxury hotel can offer such authenticity as in the photo?