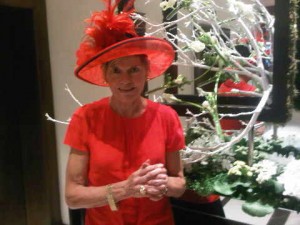 For years hotel flowers, says the gal, looked like church arrangement specials, then Jeff Leatham was brought from his native Utah to do flowers at Four Seasons Los Angeles at Beverly Hills, which is actually owned by people in the flower business.

And then Mr L was exported to Paris to set up the flowers at Four Seasons George V when it reopened November 1999 and a whole new world of hotel flowers opened up.  Many Four Seasons, and others, started having tight bunches with long stems partly hanging down in tall glass tubes, the flower bunch set at an angle and, in military style, flanked by other identical vases with identical at-angle flower bunches…   Now a new name enters the floral scene, that of Moyses Stevens. 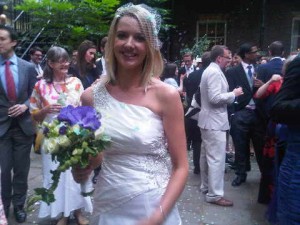 Actually Moyses Stevens is not new. The London-based company has been going since 1876 and in the heyday of the giddy 1920s its shop in Berkeley Square was called a Chelsea Flower Show every day of the year.  Today it is mail order, retail, hotels and special occasions.  One of its outposts is right in the busy London InterContinental Park Lane, for which it does all the flowers.  And see how different the flowers look … these are by the elevators on the ground floor.

Moyses Stevens also does special occasion flowers, like the bouquet that Olivia May- in a stunning bespoke dress by Jo Irvine – carried when she became Mrs Adrian Chopin on Saturday June 23rd. (Coincidentally, Moyses Stevens had also produced the bride’s grandmother’s wedding bouquet, in the middle of World War II.)

This was a memorable wedding for so many reasons. The bride’s dress was by a relation, freelance designer Jo Irvine. And two days afterwards Mr and Mrs Chopin motored to Le Manoir aux Quat’Saisons for one of their wedding presents, learning to make sushi, Raymond Blanc-style. 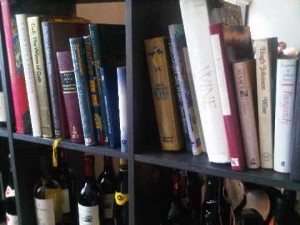 Cookbooks welcome you at the hotel's Cookbook Café

There are cookbooks galore at the London InterCon, in its clever Cookbook Café. The 447-room hotel, by the way, is an ideal wedding base.  Stay here if you are going to a do in any of the long-established gentlemen’s clubs that are still so popular (this one was at the In & Out, thanks to the bride’s father membership).

The hotel is also handy for lots of the society churches around, say St James’s Piccadilly. And Simon Rose and his concierge team are well used to storing big hat-boxes, which they do all the time not only for weddings but for Royal Ascot and so on.

The hotel is also right by the Hyde Park Corner entrance to the Piccadilly Line, for direct tube trains to and from Heathrow. Definitely invest in a room that has access to the seventh floor Club Continental, where you get views of Hyde Park and its Quadriga, cocktails and a stylish breakfast – fresh juice and great slabs of both salted and unsalted butter. 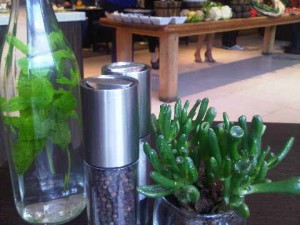 As he brought another plunger of coffee, a Dutch-Turkish waiter asked about watching the England v. Italy match that night.  Don’t worry, he said, the Italians are no good either (they turned out to be trumps in the penalty shoot-out).

So, after the wedding the night before, and breakfast in the Club, and a workout in the big LifeFitness gym and perhaps male grooming from new consultant Lee Kynaston, one-time editor of Men’s Health magazine, it is time for London’s best Sunday brunch.

You have reserved ahead at Cookbook Café, which I have long known to have one of the best breakfast buffets and certainly among the top lunch buffets in London Town.  Brunch, which is held on Saturdays and Sundays, was an eye-opening surprise.  From 1230 on the place was packed. 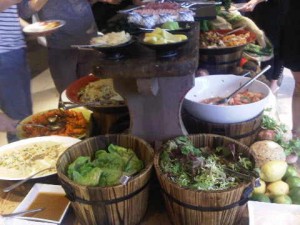 The main cold table, on a wooden kitchen table, is full of healthy goodies

There were families with kids, and multi-generational groups, and young couples, and groups of girlfriends, and all in all we were probably the only foreigners, that is to say we had travelled more than ten miles.  It was such good value, for such good quality, that if one lived in London it would make sense to starve all week and then have a treat here. Shop along Piccadilly at Fortnum & Mason and then head for brunch,

You arrive at your stated time, to be offered Charles de Fere Cuvée Jean-Louis, plain or as Bellini, and as much as you want (drink for three and a half hours). Servers in dark brown gear with a single turquoise stripe flit around, clearing plates, restocking the two main buffet tables (one cold antipasti, one desserts). 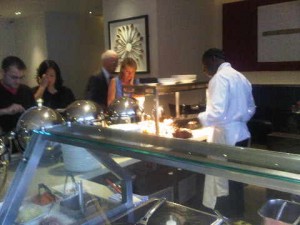 The C-shaped hot table goes from waffles via eggs through to main courses...

The Cold Market table, according to the hand-script written menu that sits on your table, alongside mint-infused water and a cactus, includes line-caught South Coast sardines, high in Omega-3 oil, and cold chicken from Berkshire or Kent. There is magnificent smoked salmon and, the choice of one small boy, lots of bibb lettuce leaves.  He had a minimalist plate – was he saving space for dessert?

A fixed C-shaped serving station offers Line Cooking, according to the menu. Choose a waffle or pancake, made as you want, or any type of eggs. Carrying on round to the main course area, a whole sirloin of Casterbridge was doing good business, particularly since it came with individual Yorkshire puddings and roast potatoes.  Yes, this is ‘the works’, and very addictive. 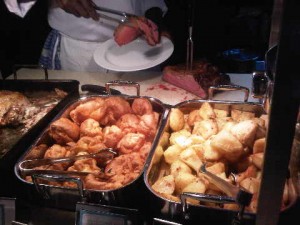 ... roast beef carved to your liking, with the must-have Yorkshire pudding popovers and roast potatoes

Cleverly, desserts are mostly already portioned, to avoid kids getting over-excited. At four today, they expect a party of 15, kids for a birthday treat.  They will all be shown to a distant corner of the big room where they can make as much noise as they like as they learn to cook (presumably not sushi Raymond  Blanc style)..

All part and parcel of the Cookbook Café’s Saturday (£49) and Sunday (£55) all-inclusive brunches, and the Best In London also runs to espresso that was just as good as anything in Italy the last few days.