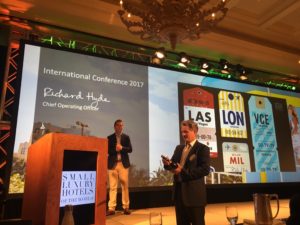 What was the takeaway for delegates at the 2017 international convention of Small Luxury Hotels of the World SLH, which included not only GMs but also a commendable number of owners? In alphabetical order, the words camaraderie, networking, quality and relevance, with sustainability and value also included, came up again and again. Thanks to a main sponsor, Laurent-Perrier, all awards winners went home not only with plaques but with bottles of bubbly – and Andrew Grahame, CEO of Hotel of the Year, Dormy House in England’s Cotswolds, above, had somehow to carry home a pair of two-bottle cartons. There were, says the gal, many other surprise moments. SLH marketing guru Tim Davis showed how the company’s loyalty programme works. At top tier, members might be given a surprise, paid for by the company. He delighted Giammario Ragnoli, GM of Stoke Park, in England, with a replacement Fitbit bracelet, and Bangkok-based Chris Stafford, right, with a Georg Jensen sword, which he immediately used, in front of all nearly-200 delegates, to sabre a bottle of Laurent-Perrier (see the first video, below). 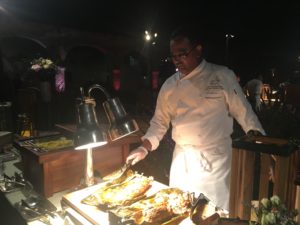 Dinner at the Mission

Extra-curricular events had been carefully planned at this three-day events. The first night was billed as a cocktail at host hotel, the Resort at Pelican Hill, but actually the outdoor evening had substantial food, including made-in-Parmesan-rounds risotto, which you personalised by adding your chosen toppings. Evening two was also outside, catered by the hotel at Mission San Capistrano: the food was pan-American, and beverages included a craft beer stand and, among the Californian wines, a memorable Pessimist Red Blend 2014. The final night was the gala dress-to-impress extravaganza, with unlimited Laurent-Perrier Brut or Rosé outside, to start, before moving inside to an intimate ballroom where someone had done a great job in the seating plan. 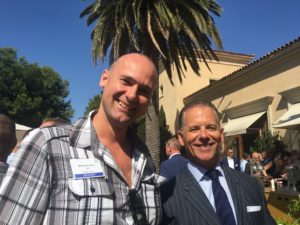 At the gala dinner, every place card was a movie-screening document starring your name. Open this two-fold, and you found the menu, main or vegetarian alternative, with details not only of the wines but also of suppliers: avocado for the starter Maine lobster salad, for instance, came from Alegra Farm here in Irvine, the local community that is named for the Irvine family that first settled the area from 1860 on. The big-band music was enlivened by Rat Pack look-alikes, with ‘Dean Martin’, in particular, showing how strongly he could belt out music that the assembled company really identified with – just as they had when real-life David Hasselhoff, ‘The Hoff’, had made a surprise appearance at the end of the convention’s business sessions, see the second video below. 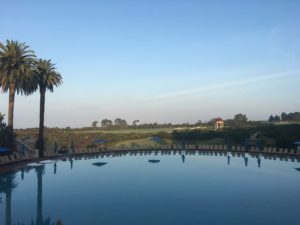 Looking back, I must say one of the highlights of this gathering of luxury, independently-minded hoteliers was full of the unique. One session featured two one-off operations. Iben Marburger described how she motivates her team at Nimb in Tivoli Gardens, Copenhagen (Denmark, to be honest, does not generally top any list in service levels). Former Paris-based theatrical and events impressario Thierry Teyssier shared his pop-up hotel concept. An existing eat-anywhere, anytime, anything hotel three hours from Marrakech will remain, he says, but he is also going to do six-month pop-ups in Cambodia and Italy staffed entirely by migrants. Yes, there were lots of unusual moments at this SLH event – and I cannot wait for the next one. I am really pleased, by the way, that I had a few quiet moments, every morning, to reflect on it all as I sat at the Coliseum Grill, overlooking Pelican Hill’s pool, which would soon be swarming with happy families and other guests and members. FIRST, CHRIS STAFFORD SHOWS HOW TO SABRE

AND A SURPRISE APPEARANCE BY THE HOFF