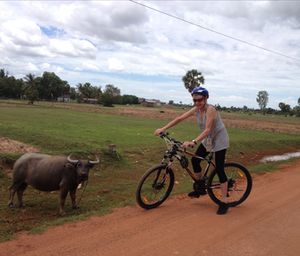 Well, as faithful followers of Girlahead know, feeding the brain and flexing the muscles are keys to being on top of life. Put the gal on a bike so she can explore the environs of luxury hotels and she is happy as a sandboy. Anantara Angkor has really excellent Giant bikes. A guide was ready, to show that you can very quickly get into the countryside from the centre of Siem Reap – his route today was south along the west bank of the Siem Reap river (opposite direction from Angkor Wat) and then head west, along some pretty bumpy roads. A buffalo on a long tether whetted the appetite for mozzarella, will there be any? 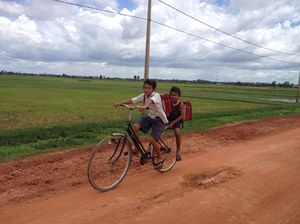 Cycling is the best way of getting around here, though a Giant mountain bike looks decidedly out of place where the norm are largest-wheels Indian-type bikes.   There are kids coming from school and kids going to school – morning school finishes at 11, and the next shift, different students but same teachers, starts at one (try telling that to California’s teachers, who get tenure after two years, but following a victory by David Welch’s Students Matter in the courtroom on June 10th, 2014, students’ rights are recognised and bad teachers may now finally be let go). I am always amazed how, the less developed a nation is supposed to be, the whiter are the school kids’ shirts. 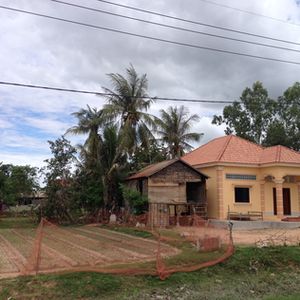 As we cycle I learn about houses and village life. The state owns the land. Farmers and other householders pay rent. Their old wooden houses, the ones I learned about from Darryl Collins yesterday, are being replaced by smart modern constructions, brick covered in concrete and painted in one glorious colour, say periwinkle blue or saffron or even strawberry ice-cream. There might be a mound of dried straw, or rather rice stalks, ready to feed the animals, zero-waist cows and buffalo, during monsoon time. 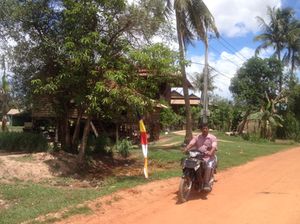 Coloured scarf is a party invitation

When we get to one village several of the houses have long scarves hanging outside. These apparently are invitations to a party, or ceremony. What kind of ceremony? Multi-coloured scarves indicate the completion of a new house, or a baby’s birth, or a wedding – like that noisy affair going on next to Darryl Collins’ house yesterday. It is all very public. In the west we do not want to offend the uninvited by publicising the names of those on an invitation list. Here quite the other way. A black and white scarf indicates a funeral, and sure enough, we then cycle past a funeral. Here there is no blaring noise. All the participants sit around circular tables, at chairs covered with fuchsia nylon dressing. No beer allowed. 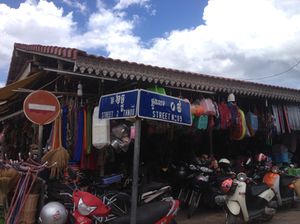 On the way back to the lovely Anantara Angkor we go back into town. We pass the Royal Residence – last time I was here, His Majesty Norodom Sihamoni, a former dance professor who speaks Khmer, English, French, and Czech and German, drove right next to me as I cycled along. He gave me a big wave. Now, the Central Market is a hubbub of international tourists buying souvenirs. There are so many Koreans they not only have their own hotels and restaurants but a Korean-owned golf course. 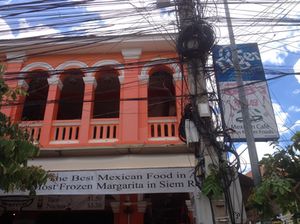 Eat whatever you want, here in Siem Reap. There are pure-French and French-Khmer galore. This, apparently, is best Mexican, or so they self-proclaim (don’t you love the cacophony of wires outside?). Me? I am heading back to my luxury hotel to see what its talented and creative chef has on tonight’s Royal Khmer menu…