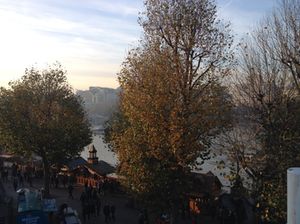 Where am I, what are these German cottages?

Another city, another luxury hotel for the gal. Looking at this picture you might think Girlahead has moved to Central Europe with the Christmas market down there, below the bridge – the last Christmas market we visited was in Berlin, what seems like months ago although in fact it was only a few weeks.  But the river here is the Thames, the scene is London, England, at a time when finally there is a German invasion, in the form of Christmas market stalls. There are so many of them they have prompted letters in The Times, for goodness sake (what is this new form of seasonal activity, with sausages and beer?).  The world does not like change and Londoners, the native Londoners, fit that generalisation. 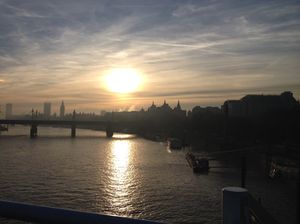 Continuing over the bridge, from Waterloo to Aldwych, convinces me yet again how romantic and established the English capital is when the weather plays the game (when the weather is bad, London is horrid, almost as bad as New York in a white-out or a blow-out).  I once travelled over all the bridges over the Thames, from tiny dribble of the river’s start to the expanse at its mouth into the English Channel.  What a waste of time since I did not learn anything en route and I cannot even remember how many dozens of bridges there are.  There is actually talk of a new bridge right now. Joanna Lumley is fronting a campaign, with architect John Heatherwick, for a pedestrian Garden Bridge to go from London’s Temple to the south of the river – a kind of copy of New York’s successful High Line. 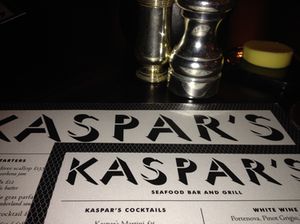 Girlahead loves creativity, and new ideas (she is not typically no-change English as she is not typically English anyway – she never drinks tea). Having walked over Waterloo Bridge, I turned left to The Savoy, a Fairmont Hotel, all set to try its six-month old Kaspar’s, named for the china cat that is placed on an extra chair if ever there are 13 guests at a table.  This is an old Savoy tradition, and calling the revamp of the old River Room restaurant after the cat is brilliant.  I am greeted by two topiary cats, flanking the main hotel entrance driveway. Down through the lobby and lobby lounge, I go into the restaurant, a busy buzz of happy people.  In London think Scott’s or The Wolseley.  In New York think Grand Central Station’s Oyster Bar. 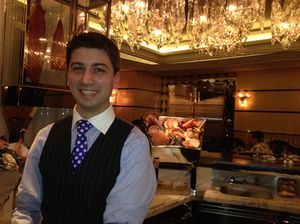 The seafood bar is centrepiece

There is a central seafood bar here, an oval affair in soft green malachite-look and fluted silver, very Art Deco and just right for this historical lady (she is 125 years old next year). Cleverly, shelves can be pulled out of the sides of the seafood bar to make extra tables-for-two, right next to the action. That action includes working with the oysters and seafood held in glass-front cabinets behind this seafood bar.  Yes, you can see a lot of what is going on. Servers are buzzing here and there, bringing your choice of oysters, currently West Mersey Rock, Jersey Rock or Native Loch Ryan, by the six or by the whole dozen.  I guess you can have them for breakfast too. Kaspar’s opens at seven a.m. and runs right through, nonstop, until the last diner has finished. 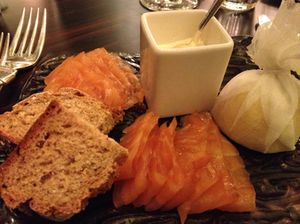 This is the most unstuffy fine dining in London and only a dinosaur would not approve of the change. And the products are the best, with Jersey butter to go with the bread rolls, and Forman smoked salmon, the ‘London Cure’. See what the Forman website says: ‘When Harry (Aaron) Forman arrived in London’s East End from Russia at the beginning of the last century he pursued the trade he knew best – curing fish; in particular, the salmon he imported in barrels of brine from the Baltic. Inspired by the exceptional quality of fresh Scottish salmon, Harry developed a cure that complemented its unrivalled flavour. The deliciously mild London Cure was born and soon it was the talk of reputable establishments around the capital. A century later H. Forman & Son remains a family concern, the last of the original London smokeries, with Lance Forman, Harry’s great grandson, flying the flag for the famous London Cure. Remaining faithful to principles established in 1905 – the freshest salmon, a little salt, just the right amount of oak smoke – he is upholding traditional values and skills that would otherwise have died out long ago, along with one of gastronomy’s finest foods: H. Forman & Son’s Genuine Wild Smoked Scottish Salmon.’ 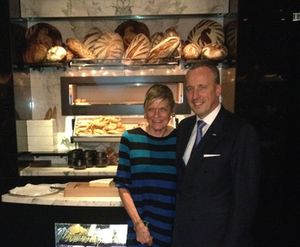 Kiaran MacDonald shows off the cheese and bread room

Forman’s was forcibly relocated to help make way for the London Olympics but the new curacy, or whatever you call it, looks stunning – and it has a restaurant (put it on the list). But, meanwhile, here I am in this iconic luxury hotel, The Savoy, and its GM Kiaran MacDonald is showing me how breads and cheese have their own little home, in an alcove off the main restaurant…. oh there is so much to learn. More to come.