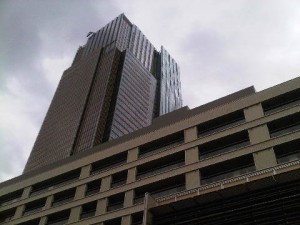 Looking up at Ritz-Carlton, Tokyo

It was Vance Packard who said…. look up!  Look up to the house on the top of the hill, to the tall person (how does Nicolas Sarkozy feel?) and so on.  In Tokyo, staying at the Conrad makes one look up, to the height that the designer, Werner Aeberhard of GA International, has instilled.

On her last visit, the gal heard all about the looking-up that will happen when the 634-meter Skytree opens on May 22nd, 2012 (and places like Mandarin Oriental Tokyo already have special viewing events to watch the opening fireworks).

But we are still at that lovely luxury hotel, Ritz-Carlton Tokyo, so let’s continue the stay.  Even looking up at the 53-floor block is pretty impressive, and yes it is another dark day, weatherwise.  Top architects Skidmore, Owings & Merrill, out of Chicago, did this building. 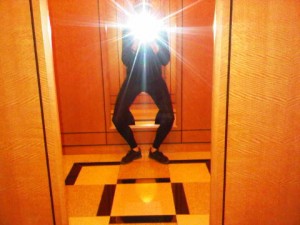 Playing around in an elevator

Inside, it is light, bright and sheer delight.  Designer Frank Nicholson may have been around for some time but he sure is this, rather than last, century.  Take the elevators, fastest in the world said then-GM Ricco de Blank ahead of the 248-room hotel’s opening on March 28th, 2007.

If you are lucky enough to be in the elevator all by yourself, and dressed in black, you can contortionise (good word that), making it look as if your legs are decidedly bowed.  You take one elevator to the 45th floor lobby, which soars up through two-floor height.  Turn right and right again to the bank of hotel-room elevators.  You pass a couple of interesting paintings – traditional artwork or modern? 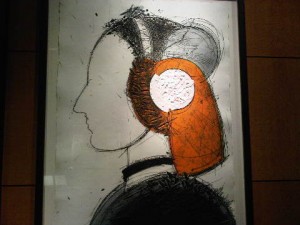 Pair of mediaeval (or modern?) wall-portraits

But then in the lobby itself, is the decorative pond traditional, or a modern artwork to show it is possible to put a shallow pond in a lobby without it leaking through. (Park Hyatt Beijing has smaller decorative water features in its 63rd-floor lobby, and so far only two people have fallen in, Hyatt’s Andreas Stalder, and girlahead’s woman-for-all-purposes…)

You have to be a bit of a contortionist, actually, to do justice to photographing this hotel’s gorgeous swiiming pool, part of the super wellness complex on the hotel’s 46th floor.  There are 200 local members who pay ‘the cost of a small house’ annually to use the gym, and the wet areas, and the pool.   This is 65 feet long, with a gently undulating ceiling, and walls either end have a kind of double-eye panel inset with mirrors. 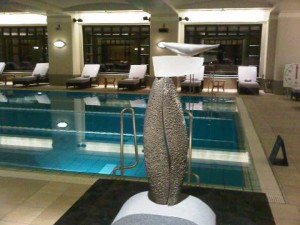 Side view of the pool

As you swim up and down the reflections, of ceiling and water, produce ever-changing artwork.  After my pre-set laps, the lady-in-black was ready for me.

She ushered me through the locker room to a treatment room (horrid word, but it seems to be industry-wide – wish it were something more appealing as ‘treatment’ could mean goose fat put on one’s stomach as a child, to prevent colds, or being forced to drink spoonfuls of cod liver oil, yuck).  Anyway, this was an ESPA special, a reviving oil applied to back and knot-twisted shoulders. 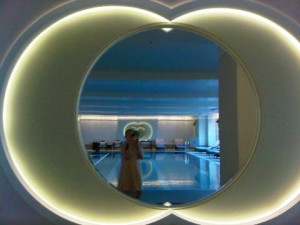 Either end of the pool are reflecting mirrors

Such service, fitting the massage into time available rather than expecting the consumer to fit into the purveyor’s time slots.  But it is the art of service that Iwan Dietschi, Swiss GM of this thoughtful hotel, is studying, long distance, at UCLA.

He gets his MBA next month, culmination of two years’ work fitted in around his hotel duties.  Most of his skypes with fellow students, the majority of whom are in California, 18 hours behind him, are during his lunch break (pity the few New York-based students, who have to log in at 2300).

He will meet all his fellows, finally, when they gather in California for the first time, to graduate next month. Iwan Dietschi is one smart guy.  He deliberately chose to do a ‘normal’ rather than hotel-oriented MBA.  He wants to see what the rest of the business world is up to.

The hotel world continues, busily 24/7, but does enough change?  This was exactly the conversation a week ago with Carsten Rath, boss of the new Kameha Grand brand.  The excitement, and open eyes, of this generation of hoteliers is really invigorating.

Although weddings are big business (these mannequins are in Fukuoka), some young Japanese men are simply 'not interested'

This appears to be unlike the Japanese ‘grasseaters’, already mentioned but only now  identified. While girls love fashion and shopping, grasseaters are young men who live at home. They have no interest in being salarymen with a professional gameplan, and they are allegedly not even interested in sex.

Apparently one survey found about a third of the 20-34 year old males had never had a girlfriend.   Drew Gilpin Faust, President of Harvard, finds that youngsters are more interested in home comforts than venturing overseas to study: Japanese undergraduate enrollment in the USA has dropped 52 percent since 2000, while graduate enrollment is down 27 percent.. 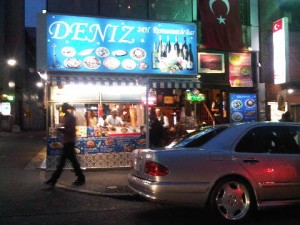 Driving through Roppongi at 0500, enroute to Haneda ('International') airport

There were, however, plenty of youngsters roaming and playing around in Roppongi at 0500.  What was the gal up to? Partying at that hour?  No, she was on her way to the airport.

Whereas the car left Kameha Grand, Bonn, at 0430, this was a treat – the car was scheduled for 0445  (there was one other person working in the 24-hour gym at 0300 and, for the record, the requested 0400 juice came on the dot, fabulous just-squeezed stuff in a carafe in ice).  We drove slowly through Roppongi and on to Haneda, which the locals seem to call ‘International’, as if forgetting about Narita.

Here is a final travel tip for Japan. Fly in and out of Haneda rather than Narita.  Leaving town, it was a mere 20 minutes from Midtown (Ritz-Carlton Tokyo) via Roppongi to the terminal, and, once inside, there was no wait at security, no wait at emigration and you can be in the JAL firstclass lounge – shared by other carriers – 30 minutes from getting into that car.  And the lounge has electric sockets at every seat, and a breakfast that was copiously outstanding, though it obviously lacked the finesse of what I sadly missed back in the 54th club lounge of Ritz-Carlton Tokyo.