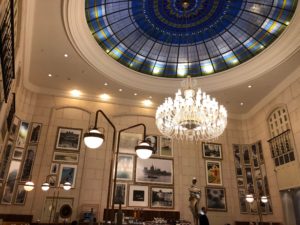 When the Adria Insurance Company built their Budapest headquarters in 1918 they did it in style. The classic nine-floor building looks out over Erzsébet Park: inside, it is dominated by a gorgeous central atrium with a hemispherical stained glass ceiling. You look down on the upper side of this ceiling, by the way, from the top of the open atrium – see above. Little did the insurance company know that exactly a century later their headquarters would have become a glorious Art Nouveau-style luxury hotel, Ritz-Carlton Budapest. 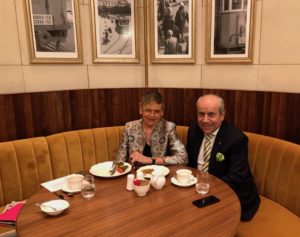 Rahim Abu Omar, a long-time business associate of the Al Habtoor family, who own this 200-room hotel, first arrived in town October 2017 as their representative, but this month he was officially appointed GM. We met up for breakfast in the atrium and he told me he is confident he can take his room rates up to highest in town. He believes in working towards such goals, non-stop; his own work days are 6.30 a.m. through to at least 8 p.m. and in between he walks the floor, talking to guests and to employees (he has taken other properties up to number-one, in rate terms, in Bahrain and elsewhere, and he is sure he can do it again here). 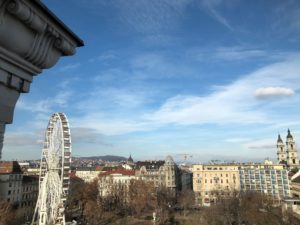 Looking out of suite 828

My favourite rooms are definitely Park-facing, on the eighth floor. Once again I was in suite 828, looking out at the wheel in the park. As the video below shows, the colouring with soft blues and creams and streaks of gold is themed for the Danube, only a couple of hundred yards away. Lacquered cabinets with rounded corners are a reminder of Art Nouveau heritage – the entertainment cabinet has a drawer minibar and, what a relief, a simple Nespresso machine (with Villeroy & Boch china, and dark WMF cutlery) 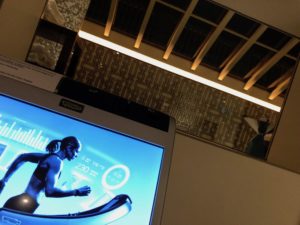 The gym looks through to the pool

The suite is right next to the club lounge, which opens at noon – there is a an eight-bottle Oenotech machine prominently set among its facilities. I was, later that evening, able to pick up a glass of Takler Kékfrankos Szekszárd 2016 to go with what I then ordered from room service, an incredibly healthy organic fusili with pesto, and a side of spinach. What seemed like a few hours later I was in the 24/7 Technogym, conveniently also on the eighth floor. I look through an interior window at the hydropool but in fact I was besotted by a YouTube video of life in the International Space Station. No pasta with spinach there, but the kitchen is rows of clearly marked bags of various foods, including Japanese and Russian: the camera went right into the sleeping pods, with sleeping bags. And then I had to come ‘back down to earth’, to shower and rush downstairs to meet my new friend Abu Omar. NOW SEE VIDEOS OF THE ATRIUM, AND SUITE 828