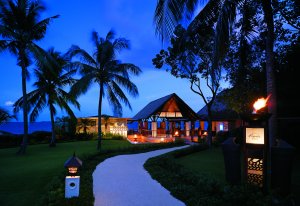 Cowrie Cove restaurant, hanging over a beach at Shangri-La's Mactan Resort and Spa

To dinner in Cebu, Philippines.  In fact, to be accurate, Cowrie Cove is an utterly romantic  luxury restaurant cantilevered over the water on Mactan Island, attached by a one-minute-to-cross bridge from the main Cebu island, one hour’s flight south-east of Manila.  Cebu was capital of the Philippines before Manila.

Now, with a population of 4.1 million for its 1,900 sq mile size, Cebu is known for, well, Dedon and other furniture manufacturing, fashion, and fabulous resorts. The gal had to go and see for herself. 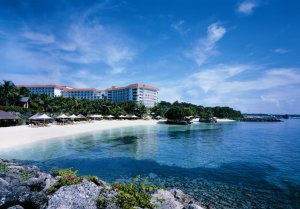 Looking up at the Ocean Wing of the resort

Shangri-La’s Mactan Resort and Spa occupies over 30 acres of magnificent shoreline land on Mactan – it has more than1,000 feet of amazing sandy beach.  This luxury resort also has 530 rooms with sensational views.  Closest to the beach is the Ocean Wing, which is also jolly handy for the LifeFitness gym, open from six, and the kids’ facilities, of which more anon.

The rooms all have balconies, furnished with the usual seating, by Dedon of course, and, unusually, proper racks for drying wet gear. 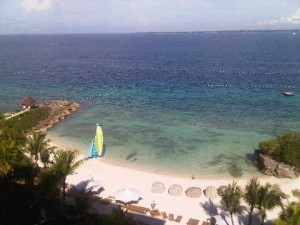 From end-room 7006 in the Ocean Wing you look down, at one of two outdoor pools (this one is 7,000 sq ft, the other is twice as large) and the beach and the sea.  Turn to your right and you can see, down there in the distance, the Cowrie Cove restaurant where dinner is planned for tonight.

I think of my last stay at Halekulani outside Honolulu. I was similarly right above the ocean, so to speak, and there, too, I heard every wave crash on the shore. 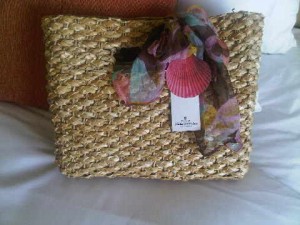 Most people arriving here are families getting re-acquainted, or honeymooners learning how to live with each other. A big Russian group is coming on incentive next January and a football field is being built specially for them: as a break from meetings, they will also enjoy the existing facilities, jogging trails and the two big pools, the gym and a myriad of water activities.

They will barely have time to meet. You need at least a day more than you anticipated to enjoy this luxury resort. I look around my room. The butler, the outstandingly anticipatory Clyde Lao offers fresh mango juice. There is already a carafe in the fridge, which has a Nespresso machine on top. 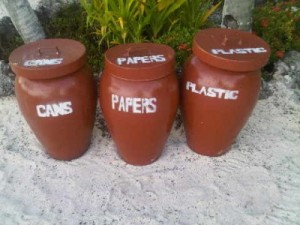 Thoughtfully, too, a beach basket is ready, to take the gear – phone and the like – that even a minimalist needs. The beach is meticulously clean – nice to see four-foot ceramic pots ready for recycling any bits and pieces. There seem to be twice the number of lifeguards one would expect.

Surely it is not true that Korean parents are sometimes a bit forgetful, like she wanders off to the spa and he retreats behind his copy of the Chosun Ilbo newspaper and their tot wanders into the water and – plop.

Thank goodness for the lifeguards. 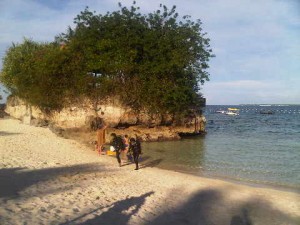 Divers returning from a late-afternoon jaunt

And there are a tremendous number of Koreans (47, yes 47, flights every week connect Cebu direct with Seoul). There are also a lot of Japanese (they do look after their children), and lots of Filipinos.

Many of these ‘domestics’ are actually balik bayan, the word for Filipino diaspora, those who work overseas and return to see their families.  Often it is easier for such a family re-gathering to take place in a hotel, for a get-together and gossip.

Filipinos anyway hate to be alone.  They gather as a family and more and more hangers-on extend the group.  See the table settings in some restaurants and you think an entire village is coming to eat at the same table.

Some of the locals here have been attracted by vouchers sold in a big shopping mall – they bought them in droves, apparently. 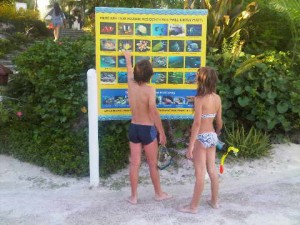 Youngsters study a marine board

You decide what you are going to do next.  Study the marine notice board to see which sea and bird lifeattracts, plan your dining experience.  We have already done that.  We are going to Cowrie Cove.

The most romantic table of all is set for two on a three-foot wide promontory, about 100 yards long, set far into the ocean.  Walk between a guard of honour of lit candles to get there.  But all tables, on the outside deck, are truly memorable.

We have chosen our fish, including fresh calamari and gigantic prawns, from a market-stall display, and it is cooked on the grill as we savour a glass of 2003 Gaja Ca’Marcanda Promis Toscana IGT.

I remember that Angelo Gaja said, after terminating a planned joint venture with Robert Mondavi in 1989, that it would have ‘been like a mosquito having sex with an elephant: very dangerous and not much pleasure’.

And at that moment the heavens opened, a tropical monsoon poured down, we ran for cover and awaited a buggy to drive me the mere 200 yards to my home.