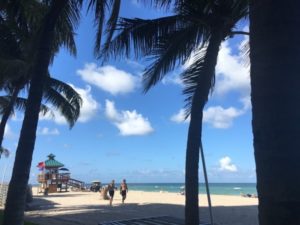 The beach is magnificent

In Florida’s Sunny Isles Beach township, king of the proverbial castle is  Acqualina Resort and Spa on the Beach, which  was deemed on Friday, August 4th, 2017, by readers of USA Today to be their favourite water-side resort in the whole of the enormous US of A. Loyalists of this multi-facetted hotel think of themselves as Acqualinas, people of a culture that is very very special, with a DNA that has many unique features. And, goodness, they do have these Acqualina followers – at the so-influential Virtuoso Travel Week in Las Vegas this Monday, August 14th, 2017, Misty Belles Ewing told an assembled group that her kids simply want to go back to Acqualina every year (no, they do not want to try anything new). This is, says the gal, a luxury hotel that breaks all kinds of records. Over 50% of guests, for a start, are repeaters, many of them coming back again and again. What are the attractions? See the video below to get an idea of the views, from rooms that go up to the 44th floor of the centre of three towers, the outer towers housing a total of 188 residences. 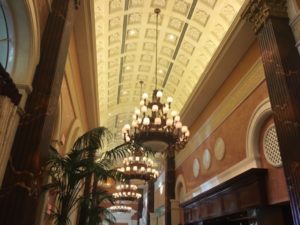 Look up in the lobby

And, as often on early mornings along the eastern coast of Florida, sunrises, as seen above, are spectacular. Facilities are pretty amazing. For only 97 hotel rooms, there are three major outdoor pools, one adults only, and there are kids’ facilities galore, and an outdoor and outsize chess set that just asks to be played. A lot of Acqualina, by the way, is on a grandiose scale. High from the main lobby’s barrelled ceiling hang six chandeliers, each three-tiers deep, with six lights at the top, twelve in the middle and eighteen on the lowest level.  In general, Acqualina’s colour is a dark tomato hue, and many of such etceteras as beach umbrellas and even covers for the required disability hoists by each pool are exactly coordinated. Someone, I suspect the detail-oriented CEO, Deborah Yager-Fleming, has gone to a lot of trouble to avoid having anything that is not perfect in this overall design. 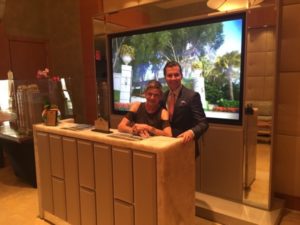 Bedrooms, by contrast, are what I call Hollywood platinum and taupe, and I loved the elegance of having fur-look throws across each sofa – this is a hotel that flaunts its Bergamot-scented ESPA products, both in bathroom toiletries and in the spa. Talking of fitness, by the way, the 24/7 Technogym is more than satisfactory for really keen fitness enthusiasts, with plenty of bits of equipment, well-maintained and continually cleaned, and supplies of polished green and red apples and also water bottles, rather than annoying little paper cups to put under a tap. After a good work out, I dined with Christof Pignet, the Austrian Acqualinist who runs the hotel, in Il Molino, one of my favourite Italian brands anywhere in the world. 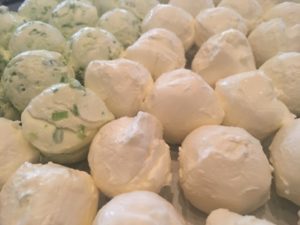 Started by Fernando and Gino Masci, Il Molino now also handles this luxury hotel’s casual AQ restaurant. Since my last dinner at Il Molino little has changed: you still enter a dark sanctum, mature waiters still ply you with pre-meal delectables, Parmesan chunks from a whole cheese, and spoonful after spoonful of cubes of tomato flesh, their version of bruschetta, and irresistible thin courgette crisps. Breads are cubes of focaccia topped with tomato, or olive, and so on. Best-sellers include a superb tuna carpaccio, which went jolly well with Emmolo Napa Valley 2014 Merlot: around us, every table was taken, mostly I think by permanent residents. Interestingly, from the hotel guest viewpoint this Acqualina lifestyle is decidedly relaxed. I was first in to breakfast, in AQ – not a single one of the cream cheese balls, to go with a variety of bagels, had yet been touched. Thoughtfully, there are complimentary coffee stations so after signing a $46 check for the buffet (eggs to order, but I had hot items from the induction chafing dishes) I took a styrene cup back up to the Hollywood-style abode. SEE IT, IN THE VIDEO BELOW.