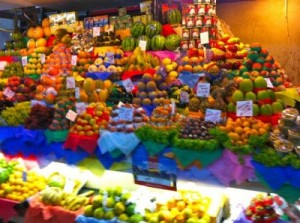 Paulistas love their food.  Talk to a São Paulo resident and you will hear about the best restaurants.

The best place to see the products is definitely Mercado Municipal de São Paulo (Municipal Market of São Paulo), opened 1933 with 72 stained glass windows by a Russian artist, Sorgenicht Conrad Filho. 450 tons of produce go through this market every day.  Last time the gal was in town she had a great tasting lunch here. 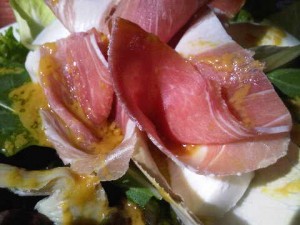 But this visit her best proper lunch was at Brown Sugar in the Jardins area.  Why it was fun was the super-casual effect of diners wearing whatever, eating whatever.   Say you start with a salad.

You can then go on to home-made tagliatelle with asparagus.   Italian food, by the way, is fabulous throughout the city.  If there are 22 million residents in the whole of São Paulo, six million of these are of Italian heritage.

In the Wall Street Journal a couple of years ago Paulo Barroso de Barros picked his list of top restaurants, which included Cosi and Vecchio Torino – and, of course, D.O.M, run by Brazilian superstar Alex Atala.  D.O.M. is fourth best restaurant worldwide in this year’s S. Pellegrino World’s 50 Best Restaurants… 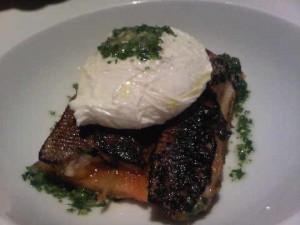 Soft-poached egg on sardine, on a toast, at Emiliano…

So what IS best?   The gal has just managed the selection of HOTEL magazine’s ten great (note, not best) hotel restaurants.  She did not nominate, she did not judge, she merely managed the judges. 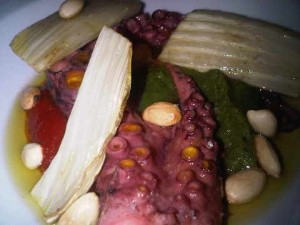 She would similarly go back to Brown Sugar, any time in São Paulo.  And it would be a positive delight to dine again and again in the restaurant at the Emiliano.

Some say the chef, José Barattino, is best in town.   This is what GoBrazil says about him: ‘Born and raised in Greater São Paulo, the young chef favors organic, biodynamic and ecological ingredients.

‘He actively supports small producers through a partnership with Família Orgânica, a consortium of sustainable food producing farms in São Paulo State.  He has interned at chef Ferran Adrià’s El Bulli, a prize for winning the Suaudeau Trophy in the Fispal fair in 2003. 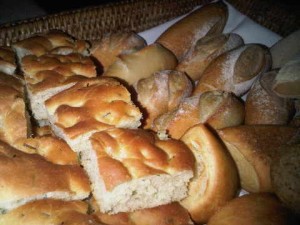 French chef Laurent Suaudeau is a major reference in chef Barattino’s career, which features several other prizes, such as Revelation Chef (2007 from Gula, a foodie magazine, and 2008 from travel guide Guia 4 Rodas) and Best Appetizers for his tomato veluttata (2008) and poached egg on a toast of sardines (2010) from food guide Paladar.’

Every single taste from Barattino’s kitchen was a delight, and portions were not too large.   I loved the way dinner was preceded by taste of cheese puffs, and a bread basket that included apple, lemon and orange rolls as well as baguette, ciabatta and foccacia. 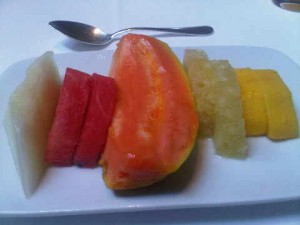 And a simple platter of freshest fruit, at breakfast

I loved the way the servers glided, as if on ice skates, and spoke in low voices.  The surrounding theatre, of living wall one side and an old black and white Charlie Chaplin showing silently in the adjacent sports bar, added to the whole effect.

Dining well is not gastronomy. Today’s luxury lifestyle does not preclude gastronomy but it also includes eating with enjoyment, with suitable service and great conversation.

And dining well is difficult to follow by breakfasting in the same place (I do not do this at home, so why should I when travelling?). 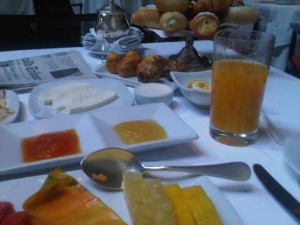 Paulistas are world-beaters when it comes to set ‘continental breakfasts’…

Here, the restaurant adapts well to early morning eating.  By daylight you can concentrate more on the living wall.   And, anyway, the food is so luscious. Paulistas do the best ‘continental breakfasts, complet’ anywhere in the world.

I have raved before and I will again about the great juice, and the platters of tropical fruit, with perfect mango and papaya.   Cold cuts include three types of cheese.  The Emiliano owns its own jam factory.

It makes all its own breads, including a breakfast tower that is a blend between an English bread pudding, unsweetened, and a Danish, and the croissants that rival any Parisian master baker. And the coffee… 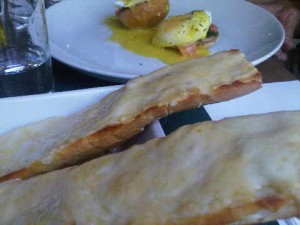 .. but you can also choose à la carte, like this cheese baguette, and eggs Benedict, at Santo Grão

But the master of coffee houses in São Paulo is, to my mind, Marco Kerkmeester, the New Zealander of Dutch origin who gave up IBM for a beautiful Brazilian girl and starting something new in her home town.

Since I was going to meet them both, of course we had to try a snack there, at Santo Grão on Oscar Freire.  We had already had breakfast but we had an early brunch. Simple.  A toasted cheese baguette, and eggs benedict.

Simply super.  That is what luxury lifestyle calls suitable food, suitable for the moment.