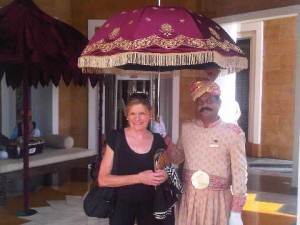 Arrival at Leela Palace Udaipur - greeted by man with embroidered umbrella, and hat

They love hats in Rajasthan, or rather the men do.   They look really dashing in what can best be described as a turban-like hat with a long tail. My goodness, research this and you find that the most popular headgear in Rajasthan is the pagri, a piece of cloth that, unwrapped is eight inches wide by 82 FEET long.

Wrap it tightly around the head leaving the tail down your back.  It is all regional.  In Udaipur one variant is a flat white turban, but fortunately at the gorgeous Leela Palace Udaipur they wear an assortment of pink and red and beige fabrics, usually as the turban-cap rather than the tailed version.  And as if hats alone are not enough, the gal was met by an embroidered umbrella. 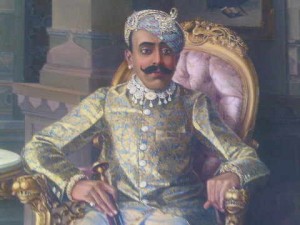 There are also hundreds, literally, of hat styles featured in old art hanging on the walls of the palace, and in wall-paintings. Walk from one of the two main blocks to the other, at second floor height, and you go through a guard of honour, 30 feet long, with processions of people and elephants painted on the walls either side.  I asked how many elephants (pictures of) there are in the entire hotel: the answer, counting paintings and sculptures, is 262.

Go into room 126, which happens to be the Maharana Suite, and there is an oil painting of the penultimate local ruler, Maharana Bhupal Singhji, who ruled 1931-1955, on one wall.  I met the present Maharana once.

A colourful character, he has a collection of old cars that includes an ancient Rolls-Royce specially adapted to carry the local cricket team in the back, as if in a truck. 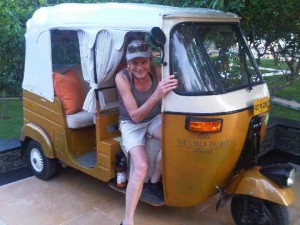 The luxury resort's tuk-tuks are being WiFi enabled

He also owns a collection of solar-panelled vehicles, including a tuk-tuk with a big panel on its roof.  The tuk tuks at the Leela Palace are electric, but they are about to become WiFi enabled.  This must be a first.  There is an assortment of vehicles here.

Boats to take you across Lake Pichola, tuk-tuks and, also, bright yellow bicycles.  Go out on them at your peril as immediately you leave the luxury resort’s outer gate you are in the hubbub that is Indian small-town life.

A goat charged at me, sacred cows were all over the place and traffic goes every direction, every part of the road.  The resort also has proper cars, by the way, and about the most skilled drivers you could find. Narrow roads with right angle bends, gullies either side and the constant surprise of human and animal life….

Undeterred, Butterfield & Robinson has seven-night biking trips in Rajasthan, from Jodhpur to Udaipur: there are four trips planned for 2013. 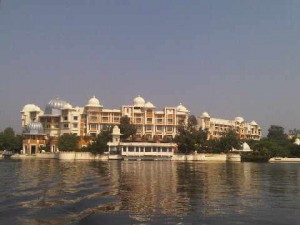 The Honorable Chairman of Leela had the first parcel of land for ten years before he got the required permits to start building.  By that time he had bought adjacent plots, including two acres filled with 80-year old guava trees (now, many choose to dine under those trees, illuminated at night with thousands of fairy lights).

Others dine, as we did, on an upper terrace of an old house, a haveli, cantilevered out over the Lake.  Another, tiny, haveli now serves as one of the most romantic restaurants in the world, dinner for two.

All around you have exquisite gardens, green lawns and sunken bits with water features, and acres of intricate black and white marble tiles, all designed by Bill Bensley. 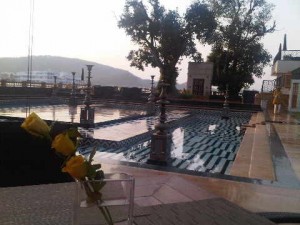 Yes, he had fun here, our Bill of The Siam in Bangkok, and the terraces with silver cherubs at St Regis Bangkok.  Here he has inserted lifesize grey crane statues amongst some of the greenery.

He has put in one of the most amazingly beautiful swimming pools anywhere, outside, but it flows on in to an enticing grotto, making a lap some 130 feet in all. Stay in the Maharana Suite, however, and you have your own pool, 40 feet in length and wide enough for your and your Maharana to swim side by side.

Around, you have a tennis-court of sitting areas on manicured Mexican grass, and decorative pools, and a hammock-swing for two. 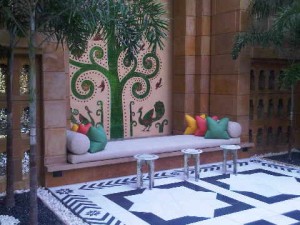 There are so many romantic areas...

There are so many romantic parts here in this 82 room hotel you do not know where to start.  You might well stay home, in your room, as every one overlooks the lake.  Or head downstairs, to the Library Bar with leather and books and cigars – next door is the glass-walled walk-in wine cellar of the main restaurant (the first bottles I picked up were Schloss Vollrads, the label run by an absolutely charming guy who was desperately trying to simplify German wine labels but then, tragically, he shot himself). 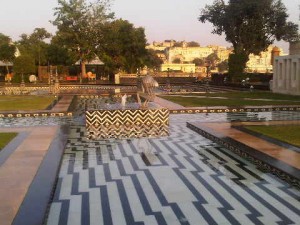 .. and several, outside, are ideal for weddings

Actually this is the ideal romantic place for weddings, which, in good Indian style, need all the elements around them.  The ceremony can be in one of the sunken Bill Bensley beauty areas, with water around, and fire bowls.  The wind might of course blow, and there will undoubtedly be the tinkling of village noise in the distance.

I am told they can seat 400 for dinner, but with only 80 rooms some of the guests would have to sleep elsewhere (the beauty parlour is equipped to be able to do 80 ladies’ hair, if necessary).  In between events one could have a spot of exercise, playing boules or croquet – or even going biking! 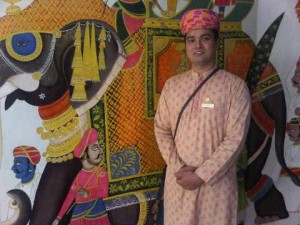 My butler in front of a fascinating wall mural

And afterwards, the happy couple will sail off into the sunset, as I did, in one of the resort’s romantic boats, powered by outboard motor.  It is not surprising that most people, who have been booked as part of a round-Rajasthan itinerary to stay here only two nights, wish they were here for at least three.

This is the place to recover after the forts and tombs and other sites. If you have run out of things to read during this relax break, I found really interesting tomes in my room, including several gold-leaf and leather volumes of the Historian’s History of the World.  I would start with Arabs-Crusades-Papacy.  That would certainly take a day. 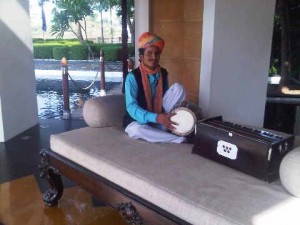 The musician played, as if a dirge, as I left

Anyway, it was time to follow that happy couple and sail, if not into the sunset, across the lake to the hotel’s BMW, waiting to take me back, via the hurly-burly of Udaipur town, to the airport.  The musician played.

The man with the umbrella escorted me to the boat and I was shown off the premises by Graham Grant, who now runs this idyllic spot.  He moved from Palazzo Versace, in his home state of Queensland, to Hayman Island to here.  Not bad, Graham!  I will be back.