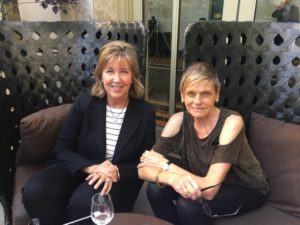 Maria Razumich-Zec is a pretty smart person. Not only is she GM of one the best luxury hotels in The Americas, The Peninsula Chicago, but she also oversees sister hotels on the West Coast, Quail Lodge, and on the East Coast, The Peninsula New York. Add to this the responsibilities of a charming husband, and a Duchess (a devoted pug) and time to enjoy life. The gal is more than impressed, especially since Maria Zec seems to have all the time in the world to talk, sitting having a cocktail on the lovely terrace off the hotel’s fifth floor lobby. 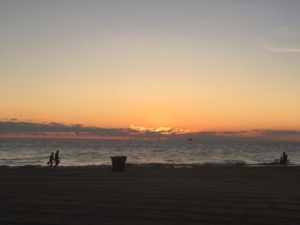 One of the many memories about this hotel is the combination of its oriental feel, its personal thoughtfulness, and its association with the destination. Bedrooms’ new designs are soft, cream and pale blue. Suites have massive wall panels, silk embroidered with delicate chrysanthemums, the flower of Chicago (see top image) – the designer of the panels is David Qian and apparently each took 320 hours to stitch. I was in 1417, a space I absolutely adored as the living room and bedroom are separated by a patchwork of wood-edged glass panels, some clear glass, some etched with the same chrysanthemum shapes. Look at the photo at the top of this piece, with fruits specially chosen for me – personal thoughtfulness is thinking about a recipient. 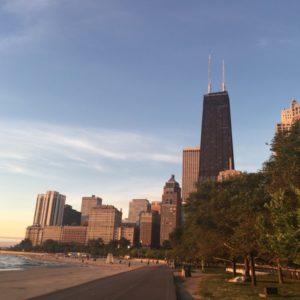 Looking at the fascinating skyline

And now the destination. I wanted to have a dose of Chicago, so I was out there on North Beach as the sun came up. There were groups also watching, as if it were Stonehenge or Angkor Wat rather than looking out at Lake Michigan. By the time I was heading south, the light was beginning to come up and the magic had already gone, but never mind. Even the Chicago skyline was pretty magical. I passed Victoria’s Secret and Tiffany, both at ground level, and took the first elevator, up to the glorious lobby, with its arrival promenade that reminds me a bit of The Dorchester’s, in London. Everything gleams and glistens. I breakfasted in the lobby restaurant, and oh the yoghurt, best in the whole of the USA, with big curds of cream bound into it (it is from Kalona). 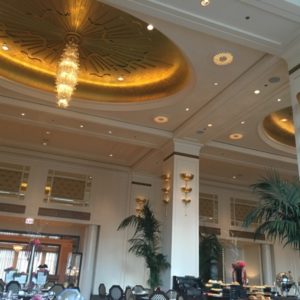 Looking up at the lobby lounge ceiling

It sounds as if all I was doing while here was cocktailing or eating, and so it continued. I met a friend for lunch at Pierrot Gourmet, the hotel-run ground floor bakery bar which spills out to the pavement in summer. We both had mixed beets salad with goat cheese, both thought it a dish that is just right for a hot summer’s day. They cleverly offer wine flights here, flights of Sparklings, or New World, or Light Old World, or Bold Old World. I had a final look around my room.

TO GET A GLIMPSE OF THIS LUXURY HOTEL’S NEW DESIGNS SEE THE VIDEO BELOW.