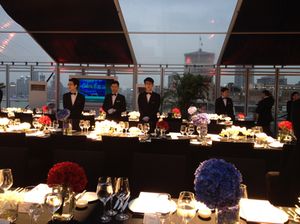 The luxury hotel that is The Peninsula Shanghai is throwing a little party, for 130 of its favourite friends. It has done its planning well, says the gal. Months beforehand, a planning committee decided to hold the party in a ‘marquee’ on the terrace of the 11th floor Palace Suite. No ordinary marquee, this is a plastic-sided, wire-framed structure that can be put up and down easily and extended at will. And while they were about it, the planners bought two tents, the other with cream walls, more suitable for daytime. Every minute detail was thought out. Six long tables would seat all guests, and four wall-set televisions would enable everyone to see one screen, at least. 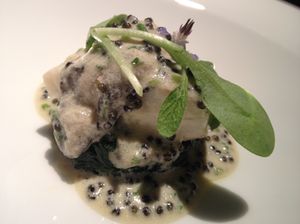 I arrived on time, thinking it a small intimate do, not that I would need 129 business cards rather than a mere couple. Peninsula COO Peter Borer led the welcome line. We stood out on the terrace, looking at the fabulous sunset view. In the tent, last minute planning was going on. The doors opened. Tables were set with navy cloths, and bunches of red, white or blue flowers, in honour of the forthcoming Peninsula Paris. Open up menus, to find stand-up cutouts of the Shanghai’s Oriental Pearl Tower, or the Eiffel Tower, in Paris. Food was French, from foie gras through to tarte tatin via turbot and oyster, and lamb Provençal. The wine was hotel-labelled Ch de La Dauphine Fronsac 2011, chosen by sommelier Jean-Claude Terjemane as a drink for the hotel’s fifth birthday this very year. 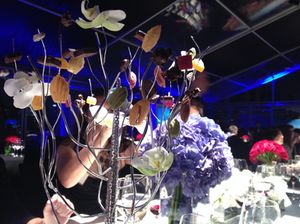 The finale featured wire trees, about three feet tall, from which hung bonbons and lollipops. The assembled company, which included the great and good of Shanghai, both local and expat, behaved like kids, choosing which flavour to take, and suck. Noise levels were rising, until the lucky draw was announced. Even greats and goods, and especially these greats and goods, love nothing more than a freebie and as every winner of an overnight in, say, The Peninsula Tokyo, was announced, the winner and all his/her friends cheered loudly. And when all the prizes had been announced, everyone went home. 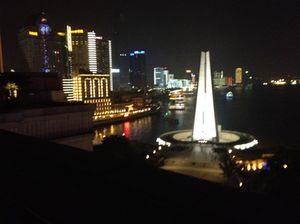 But there is nothing that the 235-room Peninsula Shanghai likes more than special events. Tonight’s tent will be put up again and again for parties, small weddings, small meetings. When Putin stayed here this May they erected another tent, a solid thing that you could not see through, over the entire front door of the hotel, to hide the security that all guests, as well as his own enormous accompaniments that included his chefs, some of his food, and his security, had to go through. Last weekend Angelina Jolie and Brad Pitt were here, this time with only three of their kids. Angelina, like Vladimir, got front page on China Times. I thought of this while looking, for the last time, at the night-time view. 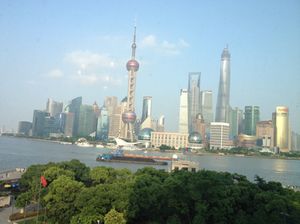 And in the morning there it was, the same view but daylight. I am back in 610, one of my favourite corner suites. I sit at my desk and look straight ahead, north down the Huangpu river to Pudong. Turn left, and I look down into the gorgeously maintained gardens of the former British Consulate – another venue that the hotel, which manages the building, can use for parties. One of the many cognoscenti staying here during this week’s ILTM asks what it is that makes The Peninsula’s rooms so perfect. I suggest the proportions, the off-white, mushroom and royal blue colour, and the plushness of the carpeting. All make you feel good. 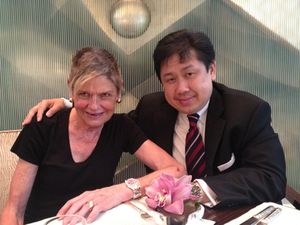 Only a few hours after his party last night, hotel GM Joseph Chong was socialising again, this time at a 6.45 a.m. breakfast – he had another meeting at 7.30. He was most happy with that party, he said, because all the local servers did such a magnificent job, working as if to clockwork but simultaneously watching, the entire time. Everyone’s challenge is 360-degrees, he says. We chat a bit about the word ‘luxury’ rather than the more meaningful ‘emotional attachment’, and decide we need to carry on talking. He repeats his mantra, namely that luxury or luxuriate is passé, both verb and noun…..it is now ‘emotions’ that remains the very core of creating that irreplaceable/intangible experience. But it must be procrastination on this one as it is, sadly, time to leave this marvellous luxury hotel.