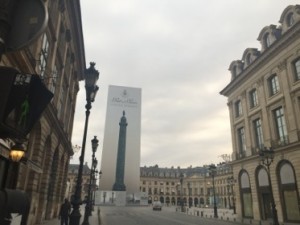 I love Paris in the springtime, wrote Cole Porter, who also loved Paris in the fall, in the winter when it drizzles and in summer when it sizzles. The gal wonders how he would love it right now, in a sizzling summer, with oodles of oversize tourists, and two of its iconic luxury hotels under wraps. But look up rue Castiglione towards Place Vendôme and you can see that the Vendôme column is also surrounded by pictorial scaffolding while it is being cleaned and repaired, courtesy Ritz Paris, and Comité Vendôme. Get nearer, and the scaffolding shows the work involved in 1873 when this particular Column was first put up. 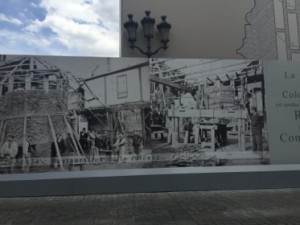 Hoarding around the Column

Place Vendôme was laid out 1702 to the glory of King Louis XIV, the Sun King,  and a bigger than life statue of the king was set in the centre. A century later, however, Napoleon wanted this replaced by a bronze column, topped by a statue of guess-who (yes, Napoleon) crowned with laurels, but a few years later a mob tried, unsuccessfully, to pull him down. Next, the column was successfully pulled down, and melted to make a statue of Henri IV. The column that we see today was erected 1873, since when it has never been cleaned – until now, thanks to Comité Vendôme. This committee has powerful members. The line-up includes the heads, France, of Bulgari, Muriel Imowicz; Cartier, Coralie de Fontenay; Chanel, Valérie Duport; Chaumet, Beátrice de Plinval (the Comité President); Christian Dior Couture, Bernard Danillon de Cazella; Swatchgroup, Florence Olivier; Van Cleef & Arpels, Chloé Jay. 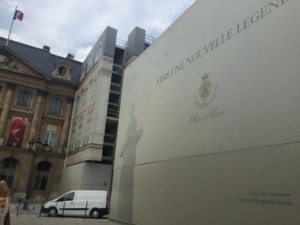 Shrouds over the Ritz…

There are also two hoteliers, Le Meurice’s Franka Holtmann, and Frank Klein, from Ritz Paris. Now this good gentleman has scaffolding of his own to worry about. Ritz Paris, put up by César Ritz in 1898, re-opens mid-December after over three years’ hibernation. It will emerge as a glorious butterfly gilded by Thierry Despont designs. There will now be 143 rooms (50% of them are suites): only 30 of the 480 employees were here before. It will obviously look amazing, and presumably the owner, Mohamed Fayed, an Egyptian, has not saved a cent when it comes to quality. 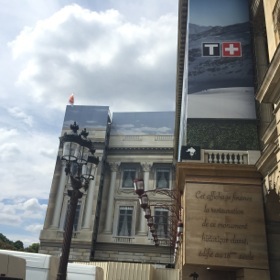 Walk around the 1er arrondissement of Paris, so lovely to do in this glorious summer weather, and only ten minutes away there is another shrouded hotel. It is almost as if wrapping-artist Christo has flitted around town, covering select buildings in decorative wrappings…. This luxury hotel, right on place de la Concorde, is the Saudi-owned Hôtel le Crillon, also reopening December. Now Rosewood, it was originally opened 1909, and I do wonder what the new-look will reveal (there are three lead designers, Tristan Auer, Chahan Minassian, and Cyril Vergniol, and they have been helped, apparently, by Karl Lagerfeld).