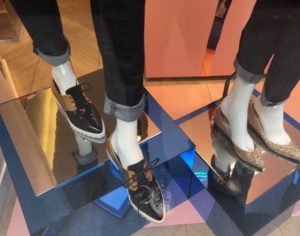 Gold shoes in a shop window

Paris in the springtime is one big burst of colour, particularly when the sun shines. Around the place de la Concorde and rue St-Honoré area, stores seem to have forgotten about winter. Look at the coloured jeans, above. Look at the gold shoes, to the left, and yes, actually out in the street you would pass probably one young thing per half hour in such footwear. The gal’s own Golden Goose shoes, now all of six months old, continue to attract a lot of attention in luxury hotels. Are they comfortable asked one size-zero, six foot and more, as she came down in a crowded elevator at Hôtel Plaza-Athenée: there was no time to answer as the elevator reached ground level, and no-one wanted to be late for Restaurant Alain Ducasse, or wherever else it was they were dining that night. 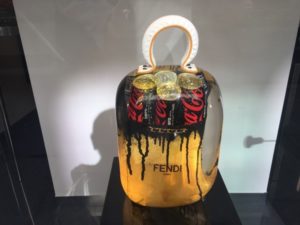 Paris also seems to be the centre of collecting, of anything. At the east side of the junction of avenues Matignon and Champs Elysées is where old men gather (forget the colour, temporarily). They are in drab overcoats, some in drab hats. Are they spies from former East Germany, Stasi re-appearing? No, they are stamp collectors and dealers, clutching drab-colour books and folios and showing their French Empire specimens to each other, haggling over prices. Funnily enough, only 100 yards north of this you begin to find the art galleries for which Paris is renowned: head up Matignon, turn east on rue du Faubourg St-Honoré towards the temporary home of M. Hollande. Handiest hotels for this gallery area are Le Bristol, and La Réserve. 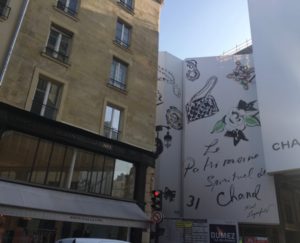 One gallery, nearer to the Bristol, has a couple of unique glass handbags by Fred Allard, a Niçoise who says his art is the expression of his feelings. Well, he has funny sentiments – one sculpture is filled with empty Pepsi cans – the one shown here in the gallery window is a kaleidoscope of Fenti memorabilia. I saw two other Allards in vitrines at Royal Monceau Raffles, but there is so much art and stuff in that lobby (that is always the way with designer Philippe Starck, he and the word minimalism are not natural bed-fellows). Carrying on walking along rue du Faubourg St-Honoré I passed Opera Gallery, which supplies all the stunning art in Buddha-Bar Hotel Paris, both inside and in its courtyard. I still remember the 1.5-times lifesize yellow anthropomorphic figure there, a couple of years ago. 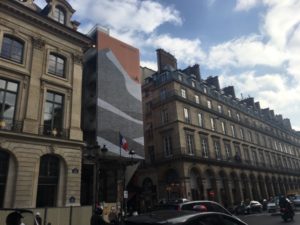 .. and Louis Vuitton building-wrap, a stone’s throw from Ritz Paris

If you want the maximum art, head for the Louvre, Musée d’Orsai or a myriad other venues. Paris has art in its gardens too, though at Ritz Paris I was told firmly that French gardens themselves are traditionally only green and white. And, more than anywhere else I have been, Paris has building-wrap art. Several luxury hotels, including Ritz Paris, have been completely wrapped during renovation: now, it seems, only Le Crillon is enveloped (when will it re-open? Honestly, don’t ask me – even the lovely GM, Mark Raffray, does not know, but it should be sometime this year). And Paris’ top boutiques, the ones you see in such glory along avenue Montaigne, near Plaza-Athenée, and even in rue de la Paix, home of Park Hyatt Paris-Vendôme, they use building wraps as extra publicity. Paris is never dull.