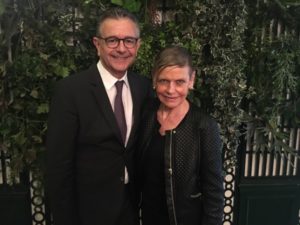 Stefan Bollhalder in the bar

Many hotels have boring bars, let’s be honest – for interesting bars, check Adrienne Stillman’s just published Where Bartenders Drink, Phaidon (the top bar for over 200 global bar people surveyed is Artesian, in The London Langham). Full marks to Stefan Bollhalder, GM of the luxury Shangri-La Paris hotel, who has turned his bar into the fascinating Le Bar Botaniste, in honour of the fact that Prince Roland Bonaparte, whose private house this once was, was a botanist. Now the bar has a living wall, and displays of plants – see above – and some of the signature cocktails are served with so much greenery and floribunda you might plausibly think you are at a horticultural show. 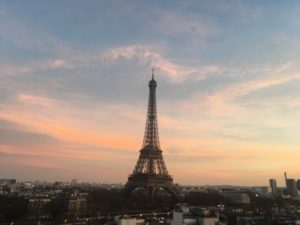 The cocktails currently overseen by the handlebar-moustached Clément Emery who  has worked at such other top Paris hotels as The Lancaster, and Prince de Galles, and, in UK, Turnberry, and Sheraton Park Lane, London  He introduced me to one of his 25 gins, a French distillation made by Calvados specialist Christian Drouin – it smells like brandy. There are regular visiting barmen, says Stefan Bollhalder, to excite local patrons, but it seems like the bar, which seats around 45, is full anyway. I was in lovely, soothing suite 507, looking down over the Seine and across to the Eiffel Tower. As the sun began to set I went out on my balcony, with table and chairs all ready for Veuve Clicquot, if I felt like it, but anyway, after my sniffing of various gins it was time to think about another serious business, dinner in the hotel’s L’Abeille restaurant, which has two Michelin stars. 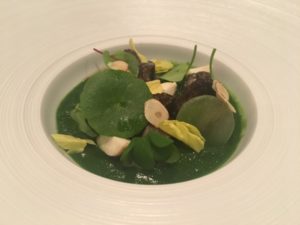 Chef Christophe Moret, I was told, believes every good dish should be sauced, but he kindly put those sauces on the side. One of his specialties is for two, a whole Bresse chicken from Alexandre Mazui, carved tableside (Bresse chicken was granted AOC, appellation d’origine contrôlée, in 1957 and today chef Georges Blanc, from Bourg-en-Bresse, is president of the Comité Interprofessionnel de la Volaille de Bresse, the association which oversees the product, which can only be produced in an area about 100 by 40 km, in eastern France). I was with Stefan Bollhalder and a friend, and the head of F&B for Wynn Palace, in Macau – gosh those two guys are foodies. I loved the paper-thin celery-studded wafers, and a green snail amuse. 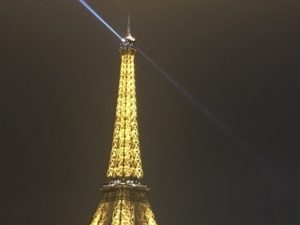 My main course was line pollack with seaweed, and, on the side, sauce marinière with caviar, which went beautifully with a glass of Premier Cru Morey-St-Denis Close Sorbè 2014 Bourgogne. Eventually the cheese trolley was discreetly pulled up, supervised by a young lady who described each cheese with the passion of a jeweller showing off her designs. At that point I left my dining companions to their talk of old times. I wanted to be up in my suite, to see the Eiffel Tower in all its evening glory. It was time for sleep with, all too soon, my alarm going off (Shangri-Las are always so thoughtful and provide proper clocks), to exercise and play sudoku in the Technogym and, as soon as the spa opened, have a blissful Organic Pharmacy facial. Sometimes one can pack a tremendous amount into what is in effect a brief stay in a luxury hotel. Quality not quantity. NOW SEE A VIDEO OF THIS HOTEL, AIMED AT COUPLES.