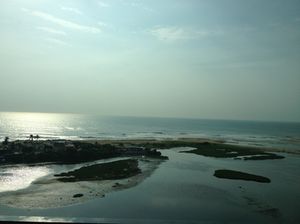 Looking out at Marina Beach

A sea view helps the seasoned traveller remember one luxury hotel from another.  In Bali the gal recalls recent visits to Four Seasons Jimbaran Bay and to The Legian.  It is far too long since she was at the Halekulani in Honolulu.  Also on the sea-view list are treasures in Miami, Riviera Maya and of course Rio.  Now the global story settles, like a beautiful butterfly, at the splendidly opulent The Leela Chennai, which is still so new it has yet to open what will be a magnificent spa.  This is the only sea-set hotel in Chennai (Madras) and you look out at Marina Beach, at seven miles, the world’s second longest, and out to the Bay of Bengal. Turn to your right, to the Adyar River 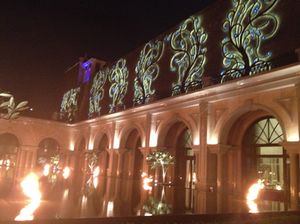 Looking, at arrival, across a pool and up at arabesques

Everything here is magnificent.  It is not – quite – as large as Emirates Palace in Abu Dhabi but nonetheless it is on a Grand Scale. Arrive at night and ahead of you is a tennis-court-sized decorative pool with inbuilt fire pits (think Trident Gurgaon). Look up to your right and there are wall-set arabesques with gold and bright blue lights – they like blue here, the hotel’s Scotch-rich Library Blue bar is approached by a catwalk of underlit blue glass floor. These arabesques, by the way, are on the side of a separating meetings block.  Want a ballroom to hold 2,000 and another for half that number, say for a really big wedding? No problem, here. 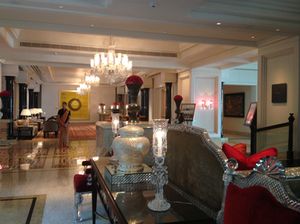 One length of the lobby

Inside the main 11-floor hotel block, you turn right to look along the main lobby lounge, with lush seating and flowers set as if for a Kollywood movie set.  I hear that five times as many movies are made here in Chennai’s Kodambakkam area as in Mumbai/Bombay’s Bollywood.  Non-Indians can, by talking to the concierge, arrange to sit in on shootings, say at AVM Studio, set up by AV Meiyappan 1931, or at Gemini Studios, which S.S. Vasan 1903-69, named after his highly successful racehorse, or at the most prolific, at Prasad Productions, started by L.V. Prasad in 1956 and today also working at eight other studios in India, plus in Dubai, Singapore and the USA. I imagine Kollywood stars sitting just-so here in this beautiful lobby, perhaps having a home-made macaroon from the colourful display at the cake shop at the far end.  They will, one presumes, be sitting facing the sea, to the left in the picture. 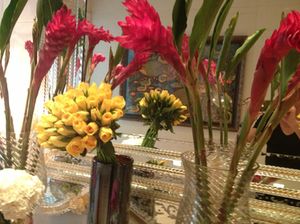 There are hundreds of flower arrangements

There are flowers everywhere, beautiful displays in this lobby, by elevators and in all 326 rooms. The building is L-shaped and favourite rooms look out to sea (oh the magnetic power of water).  As in all Leela palace hotels, rooms are plush and golden, and here bathrooms have inset telephones – just speak into a grill, like the emergency telephones in lifts. The marble everywhere is awe-inspiring (apparently it came from Italy via Beijing, where it was taken in case it was needed for the Olympics). I am taken on a tour of the Maharaja Suite, 67 metres from one end to the other, with two bedrooms, one spa room, one gym, dining for ten and, fortunately, a small kitchen. Downstairs, there are chefs cooking Indian, and Chinese, which Indians love (and it is rumoured that Sirio Maccioni will do a Cirque, as in Delhi). 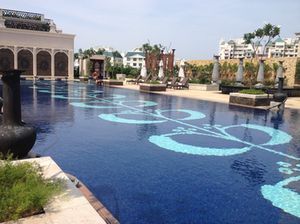 The French pastry chef produces some of the world’s best croissants, pretty enough to grace a movie, and those macaroons, and the 24-hour Spectra has sushi and sashimi, with fish from Tsukiji, and there is a weekly Friday evening seafood buffet. The only item I never see, interestingly, is kimche, and yet 68 percent of all students at Chennai’s only international school are Koreans, kids of Hyundai and Samsung.  Time for more water. Let’s look at the outdoor pool – it sits on top of those arabesques and the meeting-wedding rooms. The pool showers are set 12 feet high, suitable for basketballers of the calibre of Yao Ming. 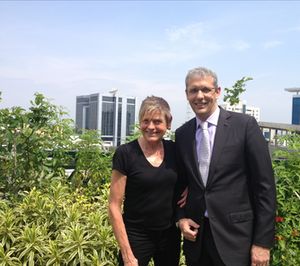 ..and one tall guy, Pascal Dupuis

Another tall guy, the hotel’s GM, Pascal Dupuis, shows me round.  He is from Cannes, and met his wife Nathalie when she was taking refuge in the Negresco from unwanted male attention on Nice’s Promenade des Anglais – he was working there.  The photograph is taken at one end of the pool. Behind, to the right, can be seen the concrete shell of what was going to be a J.W. Marriott, designed by Richmond International, but Viceroy, the developer, lost his shirt (and the project) and now it will be pulled down to build apartments. Behind, to the centre left, is the Dubai-look headquarters of the Sun Group, started and run by one of Indian’s richest, Kalanithi Maran, who owns the world’s most successful Tamil television channel, Sun-TV, plus Spice Jet and a cricket team or two.  This March Forbes said he was worth $3.3bn and, highly commendably, the Foundation he runs with his wife heavily supports many educational and medical interests.  Now as it happens Kalanithi Maran also owns the vacant sea-set plot right next to Leela Palace Chennai and, guess what, he wants to do his own luxury hotel – for any more details, sorry, you will have to read Gostelow Report.