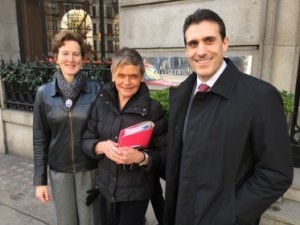 Having already raved about the style of the luxury One Aldwych London hotel, the gal has another unique feature to share. Stay here and you can take a truly customized walk with the divine Sophie Campbell – it is worth the cost, ten times over, as you feel as if you have gained a degree in local history in whatever time you specify. All 255 employees of the 105-room hotel have done an hour-long Sophie Saunter and honestly, after even only 30 minutes you realise how much you never knew. This is a walk that any keen travellers can book, and the time, and the interest, will be exactly customised. Interested in theatre or make-up history? Sophie will do it, for Covent Garden, the locale here, or the whole of London or whatever. 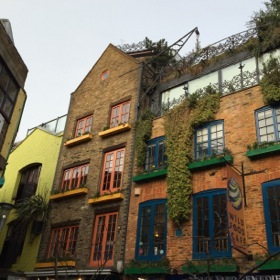 It was bitterly cold and I was wearing throw-away socks as gloves, one blue sock from a British Airways flight and one black sock that My Man had thrown out.   We had one hour, so we headed for Covent Garden, the tourist magnet that today has the Royal Opera House and top theatres, St Paul’s Church (the actors’ church), Balthazar and other world-class restaurants, and 180 tiptop-brand stores, including the ABCs of Apple, Bulgari, Chanel, going on through Dior. But oh its past. It had a convent (coNvent) in a garden, was to be designed for the Earl of Bedford by Inigo Jones, went on to become a hub of prostitution, fell into the mire but was later resuscitated. 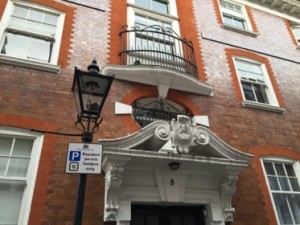 Sophie, perhaps because of the cold – though, being English stiff-upper-lip, she had swum outside this morning – walks at breakneck speed, which suits me. We dive down small alleyways, to see Neals Yard, home of what is now the world-wide Neal’s Yard organic health remedies emporia. Down another alleyway we get to the Lamb & Flag pub, with its Dryden’s Bar. This pub was once called the Bucket of Blood because men used to fight here and the poet Dryden had an all-out brawl with a member of the landed gentry. We get to Seven Dials, which a man called Neal built, originally intending to have six roads converging in a roundabout-circus but he paid for it with a lottery and got so much income he put in another, seventh, radial road, although the central, 30-foot high, sundial still only has six facets. 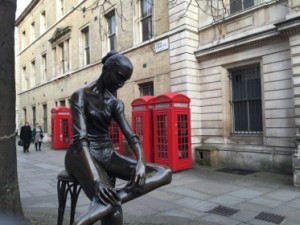 We saw the global headquarters of the Masons in the distance, and looked at Bow Street Magistrates Court, where Oscar Wilde and others heard their fate. Because of the theatres, there are many make-up shops, heirs of theatrical maquillage, and also ballet supply stores. Nearby is a charming lifesize bronze statue of a ballerina, in front of red telephone boxes – as designed by Sir Giles Gilbert Scott, architect of Waterloo Bridge that I look out at from room 210 in the luxury hotel whose warmth I shall quickly return to, One Aldwych London. I am learning more every minute. I love the still-working gas-fuelled street lamps in Mercer Street, where buildings have mermaids above the door to remember the fact that the mercers, who sold English long-yarn wool, were so rich that their livery company is still, to this day, the most affluent of all 180 Worshipful Companies. And on and on, at lightning speed. Thanks, Sophie Campbell, for sharing your erudition and thank you, One Aldwych, for so cleverly putting such bespoke tours in front of your travelling customers.