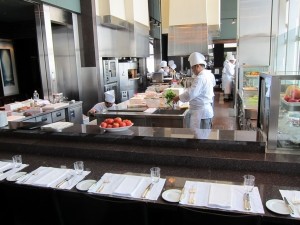 Simply Sunday. At the Arabian Hotel Investment Conference (AHIC) this last week in Dubai, Erik Saelens, Founder and CEO of Belgium-based Brandhome Group, asked the audience if anyone had a Hermès handbag at home.  Next question, aimed at the raised hands, would you now be happy with a Gucci bag? No, said the raised hands.  That was Erik Saelens’ way of suggesting to hoteliers that standards of luxury are soaring up the whole time – a Gucci owner still aspires to a Hermès but not vice versa.

Luxury hotels do take note.  At Park Hyatt Tokyo, for instance, a forthcoming promotion in the 52nd floor New York Grill is themed  N.Y. C&C.  This pairs Krug Champagne with an exclusive variety of Miyazaki 1983 caviar from rare Siberian sturgeon that has been farmed for eight years (see the image, above). Now that is the luxury to which many can aspire, and it helps put that luxury hotel on the map – again.