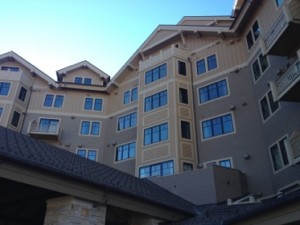 The lovely resort looks different, depending on the light and time of day

The exterior of Montage Deer Valley looks different from every angle, and unique depending on the light. Sometimes it gives the appearance of Disney, at other times you imagine some of the Trapp family coming out singing, says the gal. This luxury hotel attracts a variety of business year round, from meetings through to honeymooners and girlie-groups coming for the spa, which has 29 treatment rooms and ‘considerable’ wet facilities, plus an Olympic-sized indoor pool (kids allowed in two sessions, morning and afternoon, only). But there is lots for every age to do, anytime.

Twice a day, the hotel’s canine ambassadors, Bernese Mountain Dogs called Jonas and Monty, visit in the lobby. Every afternoon, there is make-your-own s’mores, with dark or milk Hershey and a choice of marshmallows (hold’em on long skewers over the outside terrace firepit, and slap on graham crackers to complete the sandwich). The kids’ Paintbox facility is sensational, with outside events, and activities that result in gaining yet another badge – get all 12 and you achieve the coveted Monty status. 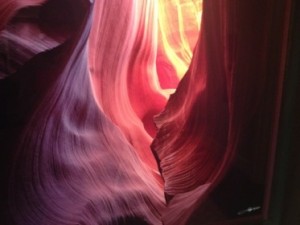 There is lots of the Old West about the hotel. In the 100 foot-long Vista Lounge, which has real log fires and winter-long real entertainment, there are statues of stags, and framed oils of local mountain scenes as they were 150 years ago. Down by the spa, however, there is highly modern hand-coloured photography of mountain and canyon interpretations of Utah topography, done in a style called cibachrome. They certainly evoke memories, for instance, of the strategic landscape around Amangiri, which is on the Lake Powell UT side of the Grand Canyon. 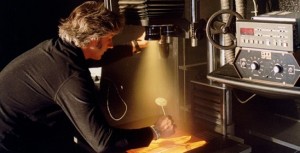 These cibachromes were taken, and coloured, by a Park City UT artist, Michael Fatali. This luxury hotel has, from the start, been really keen to support its State. The gym equipment, for instance, is all FreeMotion, which is owned by ICON, started in 1977 by two Utah State University students, Gary Stevenson and Scott Watterson, initially importers of mini-trampolines.   ICON, now co-owned with Bain Capital, is based in Logan UT and as well as FreeMotion it has Epic, NordicTrack, ProForm, Weider and a few others. Oh the things I learn as I travel the world….