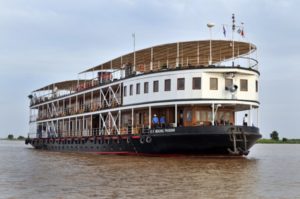 Pandaw Cruises’ eight boats sailing Myanmar’s rivers are now, since January 2017, giving onboard training to teenagers who are doing work experience at Sanon restaurant in Bagan.  Pandaw Cruises was started by, and continues to be owned by, national historian Paul Strachan and his Catalan wife, Roser, who 16 years ago adopted a Burmese orphan, then two years old: the company now has boats throughout the entire Mekong. Sanon restaurant, which is TripAdvisor’s top-ranked Bagan restaurant, serves local food with a Western touch. It is owned and operated by Richard Woolnough, who after a career in the UK’s Royal Military Police, which involved a lot of training of youngsters, put himself through full chef training. His 18 trainees at Sanon are on year-long courses, studying both front-of-house and back-of-house.