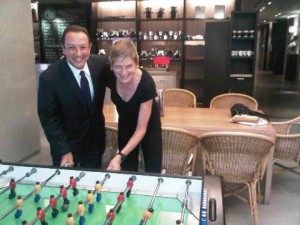 What is the story on luxury meetings?  The most important thing is that they should be not only worthwhile but FUN.  The worst place for a meeting is at sea.

It is all very well saying that participants cannot slink away for a round of golf or some retail therapy, but stay aboard for a session in what is normally a cruise ship’s theatre and, with the gentle rolling of the sea even in a no-swell situation, one is asleep immediately.

Blow any hot issue like a discussion on the US presidential elections, she is gone.  So what is the ideal location for a luxury meeting?  Until now the most WOW space has been Taj Lands End, Mumbai, with its official Harvard Classroom. Now, says the gal, she has found the world’s  most EXCITING meetings venue, Campus at Grand Hyatt Erawan Bangkok. 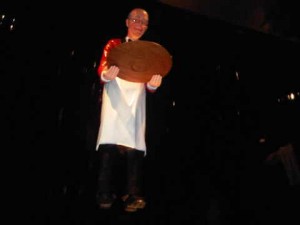 Over lunch in Tables, a stunning casual restaurant in the hotel with hilarious caricature statues high up on the wall, she heard the story.   This space, upstairs one flight from main ground level, used to be meeting rooms.

Two flights down, at the lower lobby level, there was once a Chinese restaurant.  It was all rather boring. Why not swap the venues, get rid of the Chinese and introduce an all-purpose restaurant up here?

Designer Tony Chi came up with Tables, tables you sit at, in a variety of venues (some behind beaded curtains) and tables where food sits.  At one, a proper dining room table, a Berkel slicer is used to prepare your preferred paper-thin cold cuts, at another salads are created, at another a chef in white looks after soup. 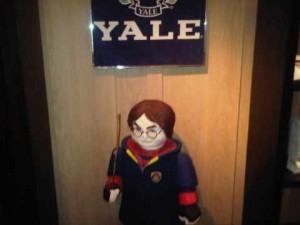 Another caricature sculpture, this time in Campus

Then, what to do about turning that Chinese into meetings? Hyatt’s visionary, Andreas Stalder, was sitting with Tony Chi trying to decide.  After a couple of hours’ non-creative conversation Stalder suddenly opened his mouth and said right, meetings are about learning, which is about schools and universities.

At that point creativity took off, and the result is so inspirational that you, and anybody, would want to go there to study and learn.  Yet another caricature statue greets you, this time under a  Yale sign. 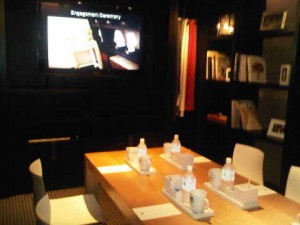 One of the meeting and break-out rooms

It is light and bright everywhere. You enter a pale, light area past a back-lit white concierge desk.  In the centre of the whole Campus, hidden by floor to ceiling back-lit walls that look like white lucite, is the auditorium, a square that can be entered via any of the four walls.

Around this is a wide corridor with, on the periphery, meeting rooms. ‘The only source of knowledge is experience’ (Albert Einstein) is one of the many homilies on the walls.  One room has another, ‘Forever connected, Forever learning, Forever inspired’.

Break-out rooms around may look out into real bamboo forest: they may be filled with real books (The Library) or white plaster busts of famous people. 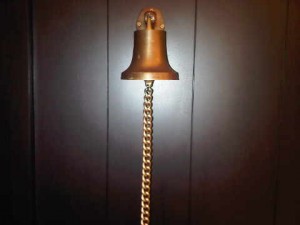 A school bell, for beginning and ending sessions

Instead of a simple sign saying Do Not Disturb, you put out a cane, the kind that schoolmasters used to use on naughty boys.   One room has a real old-fashioned bell, to ring for what I do not know.

But it is fun, anyway – as are the two table soccer tables, and the Campus Store, with a list of supplies written in chalk on a blackboard wall.

And there is a Tuck Shop, a Scandinavian pale-wood haven with really good-looking healthy fare where meeting-goers pick up help-yourself lunches or anytime snacks. If you need Xeroxes, or a Fedex parcel sent or similar, there is a fully-operational office. 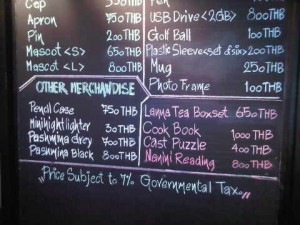 At the back of the Campus Store, a slate lists items for sale, and prices

When your meetings are over and you want yet more fun, you are only a few minutes’ walk from some of Bangkok’s best central shopping (and ten minutes from a Central Department Store if, like me, you left your bikini behind).

For culture, you are one minute away from the Erawan shrine, where every day thousands queue to pay their respects and light a candle.  This shrine has good karma, says Richard Greaves, boss of this luxury hotel. 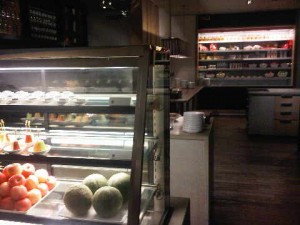 Of all the 380 rooms here, my favourites are the six Spa Villas around the curvilinear outdoor pool on the hotel’s fifth floor terrace – 502 has the biggest private garden, by the way.

I coincided with the American self-appointed travel pundit Peter Greenberg there, by the pool.  One of us swam lots of laps, the other sat and watched. Guess which was which, though I think both then headed to the i.sawan spa. 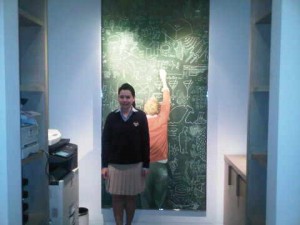 At the rear of Campus' Business Centre, a real attendant (in 'school uniform') stands in front of a painting of a boy by a slate

Back to meetings.  If any meetings organiser is at wit’s end to try and find a new facility, head for the centre of Bangkok, to the luxury hotel venue of Grand Hyatt Erawan.