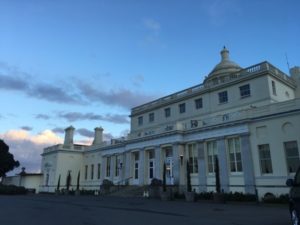 More breakfasts?  Well, it is unusual to have a Greek guru in the form of the 4th century BC orator Demosthenes looking down at you – as shown above – as you help yourself to morning croissants and petits pains au chocolat, but that is what you experience at Stoke Park in rural England, albeit 20 minutes from Heathrow. This is a luxury resort that is full of surprises. 21 rooms are in the original wedding cake-look Mansion, built in 1775 by George III’s favourite architect, James Wyatt: a further 28 rooms are in the somewhat more modern Pavilion (2000-vintage, with art that is likely to include optical illusions of Marilyn Monroe). This visit, the gal stayed, for the first time, in the Mansion. 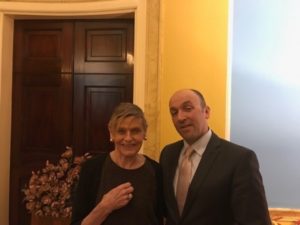 Up eight stone steps from the forecourt and you go straight into a succession of high- ceilinged historic rooms, some for lounging, some for dining, some for meetings and events. The very-Italian GM, Giammario Ragnoli, knows these English-historicals well as he has been here for eight years and his past includes a spell at the Compleat Angler in Marlow. Here, 80% of staying guests are British, and many of the total complement come for golf, or racquets, in other words tennis, for three of the 13 courts are inside. Every late June the hotel hosts jewellery company Boodles’ tennis tournament, where every day of the four-day duration over 2,000 spectators come from far and wide to watch, and drink Perrier-Jouët. 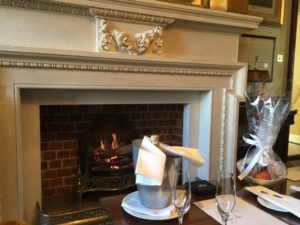 Rooms in the Mansion are, well, suitably traditional. As you can see from the video below, Pennsylvania has a very-plausible gas-fuelled fire, and a solid and historic four-post bed, and a terrace overlooking some of the 350 acres of rolling grounds. Pennsylvania was where much of the movie Bridget Jones’ Diary was shot, so this suite is understandably popular. Pennsylvania also attracts American history lovers as it is named for a one-time owner of the mansion: the whole estate was bought, just before the building of Wyatt’s design, by the Hon Thomas Penn, second son of that Founding Father, William Penn, and it remained in the Penn family until 1848. Shortly after, Landseer apparently painted his iconic Monarch of the Glen stag portrait here (it has just, thankfully, been saved for the UK nation). 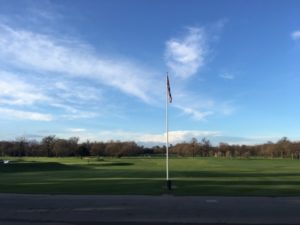 View from the Mansion’s front door

Guests in the Mansion are staying in a museum, of fabulous architecture, and historic paintings and wall-hung tapestries that date back centuries. Here they have their own reception and two restaurants, but I, like many others, walked the 300 yards across to the Pavilion, for its large and well-used Startrac gym, which opens 6.30 a.m.: the indoor pool and spa are over there too, as is another restaurant, which is, as if in deference to the GM, Italian. But only at the Mansion can you come out of the front door and enjoy the incredible vista, of some of the 27 holes of golf, originally laid out in 1908 by Harry S. Colt. As I leave this fascinating luxury hotel, part of SLH, I think of other movies, notably a succession of Bonds, that have used this as a location.

NOW SEE THE VIDEO BELOW